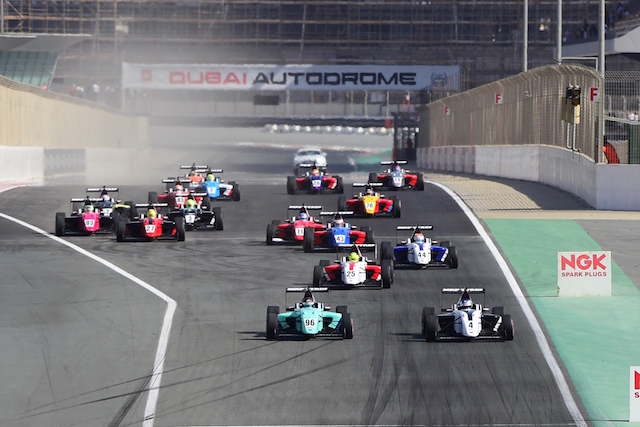 The Australian began the second event of the series?with pole position, but it was fellow front-row starter?Harrison Newey who took victory in race one after the pair went side-by-side four laps in.

Drugovich scored his maiden car racing win in race two, overhauling his ADAC Formula 4 rival Vips on the opening lap after they started at the front of the reverse grid.

From fifth on the grid, ADAC F4 champion Mawson pushed Drugovich hard but had to settle for second in front of Vips, Schumacher, Cardoso and Newey.

In race three, Newey beat Mawson into Turn 1 for the first time, as regular Prema team-mates Schumacher and Vips collided behind to trigger a safety car.

Mawson got back ahead of Newey at the restart, but soon ran wide and fell to third, clearing the path for Newey’s second win, with Drugovich taking second.

Van Kalmthout – who will race for Carlin’s new USF2000 arm next year – got a better start than Young to lead race four, but could not keep a charging Mawson behind for long, with Drugovich also moving past.

Newey climbed to third on lap one but had to retire with a technical problem, before?Schumacher then surged into the same position from the back on the grid, only to suffer a puncture.

That enabled van Kalmthout to cross the line in third, but he took a 10-second penalty for a jump start and fell to eighth.

British F4 race winner?Zane Goddard?therefore concluded his debut weekend with a podium, in front of Vips, Young and Kim-Luis Schramm.

Mawson’s championship lead is 28 points over Newey, with Drugovich a further eight points back and three ahead of Schumacher.