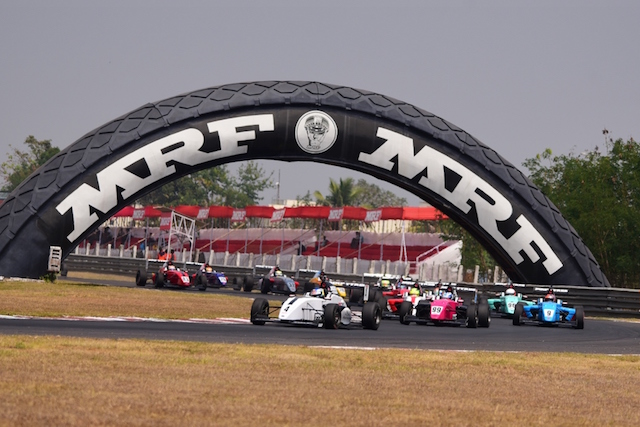 Joey Mawson retains the MRF Challenge lead into the final day of the season after sharing the race wins on day one at Chennai?with?rival?Harrison Newey.

Mawson had a tough start to the event, with a scrappy qualifying session leaving him seventh on the grid and fifth in race one, as Newey cut into his points advantage?with victory from pole position.

The ADAC Formula 4 champion responded however with a dominant win in the reverse-grid race two, and will take a margin of 27 points into Sunday’s two races.

Newey won by four seconds in the opener over?Mick Schumacher, who started on the front row of the grid but was beaten into the first corner by a fast-starting?Ralf Aron from fifth.

Schumacher eventually regained the place from the Estonian, who was followed across the line by compatriot?Juri Vips, whilst Mawson took fifth away from debutant and new Red Bull Junior?Dan Ticktum, who qualified a fine third but slipped back in the race and?finished just ahead of?Felipe Drugovich.

Dylan Young?leapt ahead of the Brazilian from 10th on the grid at the start, but spun as he ran wide while being passed by Drugovich, with Ticktum’s fellow Red Bull newcomer?Neil Verhagen also rotating in avoidance. That enabled another debutant, F4 South East Asia champion?Presley Martono to take eighth.

Ticktum started on reverse-grid pole for race two but Mawson got the better start and went on to win by nine seconds over Aron, who got by Ticktum on lap five.

That move was followed on the same lap by Newey taking fourth from Vips and Schumacher getting sixth from Drugovich, but the German would slip back to seventh before the finish.