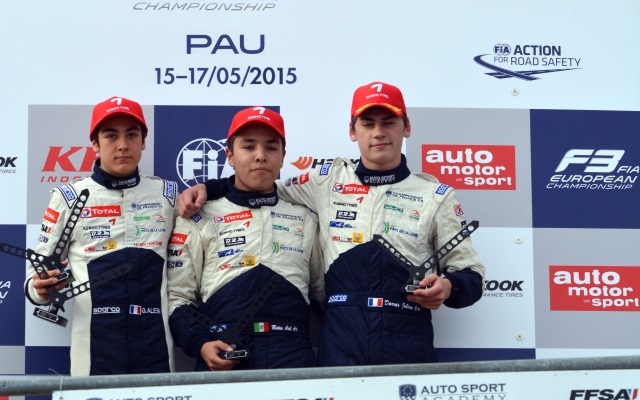 Axel Matus celebrated the first French F4 victory of his career in the second race at Pau.

Starting from the front row thanks to the reverse-grid rule system, Louis Gachot and Ye Yifei led the race early on.

However, two separate spins saw both of them drop down the order. Ye rejoined at the tail end of the field, while Gachot lost a lap while changing his front wing.

As a result, Matus inherited first and was soon able to establish a safe lead, with second-placed Julien Andlauer coming under massive pressure from a train of cars.

First it was sophomore driver Reuben Kressner who tried to overtake the Frenchman but he ended up in the barrier, having went for an overly ambitious attempt into turn one.

Giuliano Alesi was next up and the Ledenon race winner was able to take advantage of a minor mistake from Andlauer to take the runner-up spot.

He would go on to finish the race in second behind Matus, despite coming incredibly close to a crash as he lost the rear of his car and narrowly avoided the barrier.

Julien Darras and Gabriel Aubry both managed to pass Andlauer on the final lap to take third and fourth respectively, despite Aubry having been hit by Simo Laaksonen earlier on.

Ye ended up taking sixth ahead of Hugo Sugnot-Darniche and Theophile Senegas. North American duo Michael Benyahia and Kami Laliberte completed the top ten, while Valentin Moineault had to settle for 11th after going off track while trying to pass Andlauer.

Winner of race one Sacha Fenestraz retired on the second lap of the race in the pits.