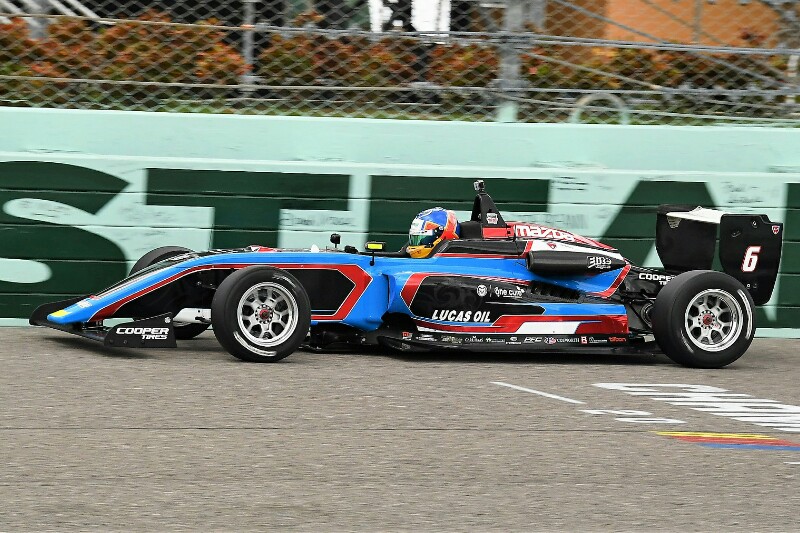 Northern Irish Formula Ford 1600 champion Matt Round-Garrido has secured a USF2000 seat this year with Jay Howard Driver Development, despite missing out on the Road to Indy Shootout scholarship.

The 18-year-old finished third in the BRSCC National FF1600 championship last season, and has two single-circuit titles to his name in the category. His Northern Irish triumph earned him a ticket to the RTI Shootout and the attention of Jay Howard.

Before the Shootout took place, Round-Garrido was drafted in last-minute to test for the team at Homestead-Miami Speedway, a call he received while driver coaching at a kart track. He impressed, despite having to fit his 6’2″ frame into another driver’s seat.

A second test at NOLA Motorsports Park essentially sealed his seat at the team, having also tested in a BRDC British Formula 3 car during the off-season.

“But overall it was clear that the offer to come to the States [with JHDD] was going to be the best for my career long-term, so from that perspective it was an easy decision.”

The eponymous team of 2006 Indy Lights champion Howard has competed in United States Formula 4 since 2017, and will be new to USF2000 this year. It has already signed Christians Bagle and Rasmussen for its USF2000 campaign.

“I?ve been around a number of teams and even worked for a couple on the mechanical/engineering side of things. So when I see the winning mentality that the boys here at JHDD have I can?t think of a reason as to why we won?t have the best car this season.

“The truth is it?s going to be down to me to bring home the goods.”

The 21-year-old Brazilian finished 16th in the 2018 standings, taking just one top 10 finish. In 2016 she did a half-season in the championship, entering the opening round in the National class.

?This will be my third season, so I know the car, I know almost all the tracks, and with that experience and with a very competitive car, I hope to achieve great things.?