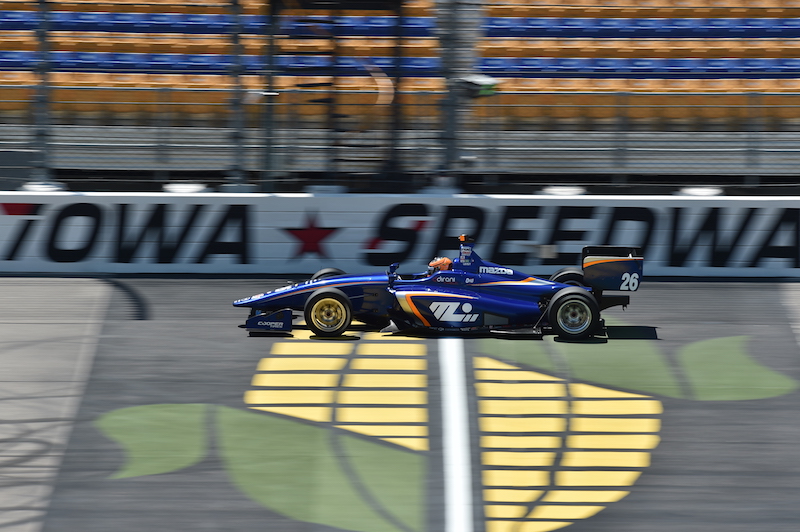 Matheus Leist reinforced his oval specialist status in Indy Lights with a dominant win at Iowa Speedway, following up his dominant win in the Freedom 100 in May.

Leist qualified a lowly 10th on the 14-car grid, and was up to fifth when the race went to caution just before quarter distance of the 100-lap race due to a Garth Rickards spin.

Although it was an impressive climb up the order, nobody looked likely to threaten poleman Colton Herta up front, with Zachary Claman De Melo, Kyle Kaiser and Dalton Kellett battling amongst themselves.

On the restart Leist took it to another level though, taking the high line and demoting Kellet, De Melo, Kaiser and Herta in quick succession. Within one lap of taking the lead he had already built a margin larger than Herta had had at any point.

Leist quickly built that lead up to six seconds, and it stayed at around that distance until the Brazilian encountered traffic. Even then the lead only dropped to four seconds, and it wasn?t until the very end of the race that it dropped below three seconds.

Possibly inspired by his fellow South American, Santiago Urrutia went on his own charge from a lowly grid position and managed to secure second from 11th place.

At first progress was slow, but in the second half of the race the Uruguayan was on it, moving past Herta then hounding Kellett and Kaiser until mistakes allowed him to slip past both and pull away.

He then performed donuts on the pit straight after the race, mistakenly thinking he had won.

With Kaiser dropping time at the end, Kellett was safe in third, with Herta even re-passing Kaiser for fourth.

Callum Ilott gets F2 chance at Silverstone with Trident