Matheus Leist moves to BRDC F4 with Double R for 2016 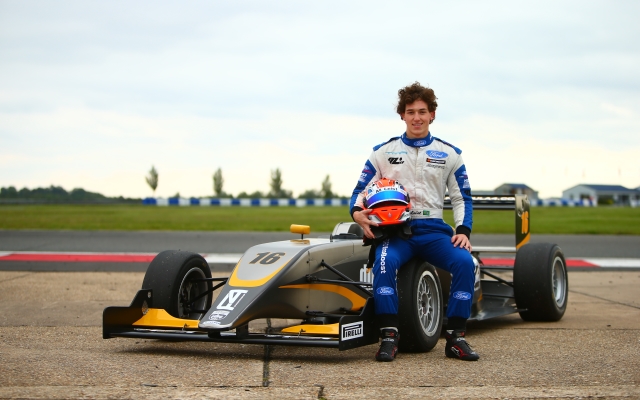 After a season in Formula 3 in his native Brazil, Leist contested his maiden season in Europe with Double R in the British FIA F4 series in 2015.

He finished fifth in the standings with race wins at Donington and Silverstone, and also made his European F3 debut with Anthony ?Boyo? Hieatt’s team in a one-off at Spielberg.

Double R confirmed its move into BRDC F4 on Tuesday and has now quickly firmed up Leist’s place in its line-up.

?It?s really great to be staying with the guys at Double R for the move up to BRDC F4 and I?m really looking forward to racing the new car,” said the 18-year-old, who follows MSA Formula champion Lando Norris into the new-look series.

“We had a strong season this year in MSA Formula and I know we can do the same again next year in the BRDC series.

?The car is a big step on from the car I raced this year, it?s very quick and has a lot of grip from the aero ? I?m really impressed by it.

“Hopefully we can have some strong preparation over the winter and push for wins and the championship. I know Double R will give me a great car.?

Hieatt said: ?We?re absolutely thrilled Matheus is staying with us for the move into BRDC F4 and I?m confident he can be a realistic contender for the first championship with the new Tatuus.

?It?s an exciting time for the team and with a good testing programme between now and the start of the 2016 season, I?m sure Matheus will be more than ready for the challenge.

?He?s a great talent, we had some fantastic results in MSA Formula this year and, obviously, a couple of wins and we intend to show that same level of performance in BRDC F4.”

Leist’s MSA Formula team-mate Tarun Reddy has also tested the BRDC F4 car already and described it as the ‘perfect’ step for him next year.