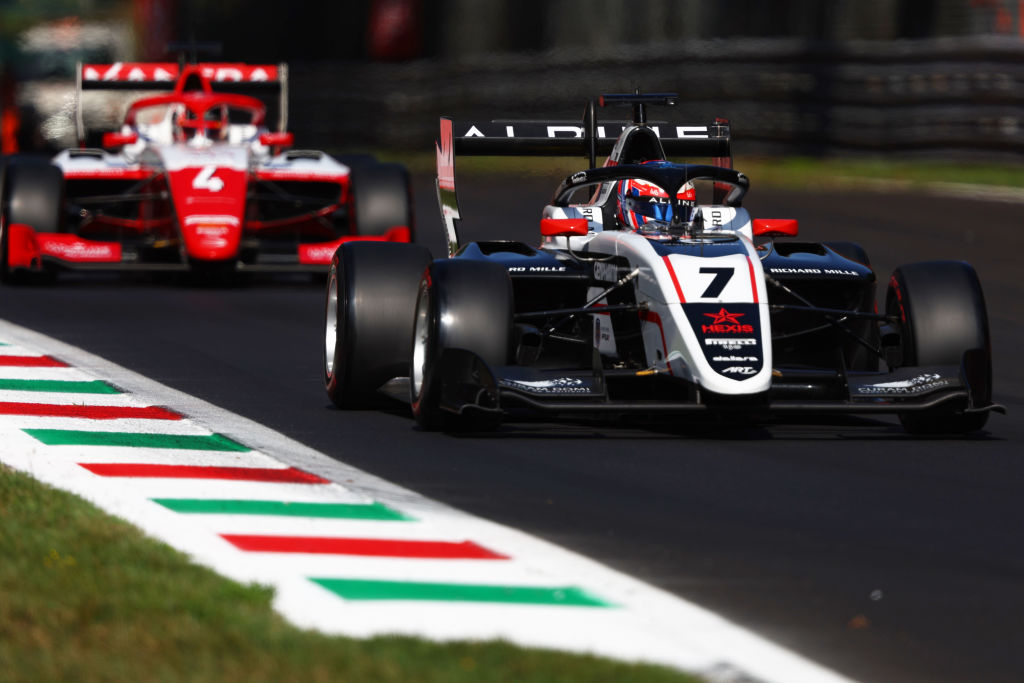 Victor Martins was crowned 2022 FIA Formula 3 champion in a shortened feature race at Monza won by Trident’s Zane Maloney, who came out as championship runner-up.

A late red flag ended the race early and caused minutes of uncertainty as it was unclear what the final result was.

Maloney took the lead of the race into turn one after a good getaway allowed him to gain the inside of MP Motorsport’s polesitter Alex Smolyar. Arthur Leclerc tried to make up places around the outside, but had to cut the chicane as there wasn’t enough space with ART Grand Prix’s Martins and Trident’s Roman Stanek in his inside.

The safety car was out at the end of lap one as Campos Racing’s David Vidales and Van Amersfoort Racing’s Rafael Villagomez collided at the first Lesmo and their cars had to be recovered from the gravel trap.

Carlin’s Enzo Trulli and Brad Benavides also had an incident at the della Roggia chicane. Trulli hit the back of Benavides, losing his front wing. Both drivers continueed after pitting for repairs.

Racing resumed at the end of lap four with Smolyar retaking the lead from Maloney ahead of the braking of turn one. However, it wouldn’t last long as he went wide and had to squeeze out Maloney at the exit of the corner, losing traction and enabling Martins to take the lead around the outside of Curva Grande.

After a couple of failed attempts, Maloney overtook Smolyar with hard braking at the first chicane, and went on to take the lead from Martins in the following lap.

On lap nine of a scheduled 22, Leclerc, Smolyar and Stanek headed three-wide into the braking zone of the main straight as the two either side attempted to move ahead of Smolyar. Then Leclerc opened his line going into the corner and made contact with Smolyar, who also touched Stanek. Both Leclerc and Stanek took the escape road losing places. Despite staying on track, Smolyar soon started to drop back and ended up retiring in the pits a few laps later.

The race progressed and Bearman, who had risen to third place, got past Martins for second. He was attacking Maloney for the lead when the safety car was deployed again on lap 16 as MP’s Kush Maini spun exiting the second Lesmo and Benavides couldn’t avoid him. The race was red-flagged one lap later and did not resume.

A five-second penalty handed to Martins during the red flag for exceeding track limits dropped him from third on the road to fourth place.

Results were then taken from the end lap 15, and after several minutes of confussion because of how penalties were applied, Maloney was declared race winner ahead of Bearman and Crawford with Martins down in fifth but becoming champion by five points.