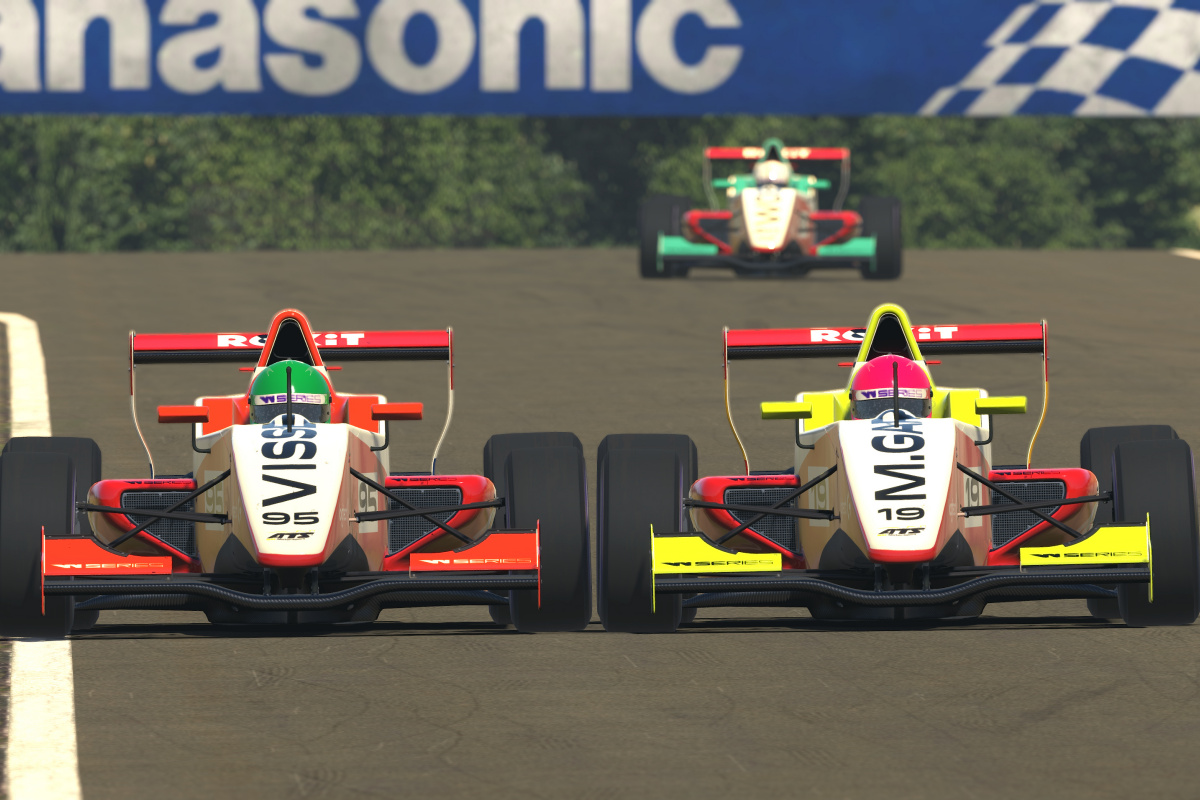 Hannah Grisham and Gabriela Jilkova – who both missed out on a place in the aborted main series for 2020 – were invited along for the event as non-scoring guests.

Jilkova, in particular, is very experienced in iRacing, which the series runs on.

Points leader Visser took pole for the first race but was jumped by Marta Garcia at the start. Further around the opening lap, Irina Sidorkova damaged her front wing after contact with Visser, and Tasmin Pepper rolled over on the opening lap in the midfield.

Visser was able to keep within a second of Garcia throughout the 15-minute race, but with a few laps to go, she pulled a stunning move around the outside of 130R to take the lead.

A lap later, Garcia pulled a move at the same corner – this time around the inside. This move proved to be decisive. Visser fell short by just 0.3s at the end.

Caitlin Wood rounded out the podium, ahead of Nerea Marti, Ayla Agren and the recovering Sidorkova. Jilkova ended up 10th.

The reverse grid race started with Bruna Tomaselli and Belen Garcia on the front row, with Garcia the one to take the advantage.

Tomaselli’s pace was not strong, causing a bottle effect for a chunk of the 15-minute race.

Visser and Sidorkova – both then in the top two of the points – were caught up as Miki Koyama spun out at 130R on the first lap. Both suffered substantial damage.

Belen Garcia’s pace out front was sufficient enough to resist any late pressure from Jilkova, who elevated herself into contention after a dice with Pepper. The guest driver took her maiden podium finish at the second attempt.

Ayla Agren also secured her first series podium in the series in third, ahead of Marta Garcia – who pulled another daring move late-on, this time on Pepper into Degner 1. Visser and Sidorkova both failed to finish in the top 10.

The 20-minute third race was the Marta Garcia and Visser show once again, with Visser getting a better start this time.

The pair duelled early on, with Garcia recreating Visser’s 130R move from the first race to take the lead.

Contact between the duo later on gave Visser slight damage, but significant enough to affect the pace of the series leader. This allowed Pepper through into second and Marti – who pulled several lunges during the event – into third.

Meanwhile, Sidorkova, Jilkova and Wood were all frontrunners caught up in opening lap troubles.

Visser kept largely in contention and gained third after Pepper was penalised. Agren finished fifth ahead of Belen Garcia and Koyama.

Grisham spent much of the event in the middle of the pack but was able to run in the top 10 throughout and finished ninth in the third race.