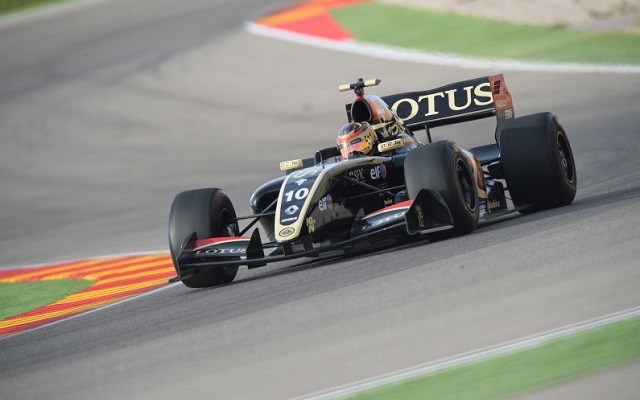 Lotus F1 junior Marlon Stockinger ended Raffaele Marciello‘s streak of dominance over the Formula Renault 3.5 test at Motorland Aragon as he topped the opening session of the final day of running.

Marciello, switching to Arden after two days with Strakka, was again consistently present at the front, leading the session into the final hour. However, he was ousted from first shortly after, with Eurocup runner-up Oliver Rowland taking over at the top.

In the closing twenty minutes, Rowland was overhauled by Stockinger, who wound up seeing out the session in first place. Meanwhile, Strakka’s Will Stevens rounded out the top three.

Marciello settled for fourth, ahead of Pietro Fantin, who stuck with Draco for the entire duration of the event. Swiss driver Zoel Amberg made it two Arden cars in the top six.

Amidst speculation that his Sauber deal fell through, Sergey Sirotkin took seventh, ahead of compatriot Nikolay Martsenko, who brought out a red flag with seven minutes to go, ending the session early.