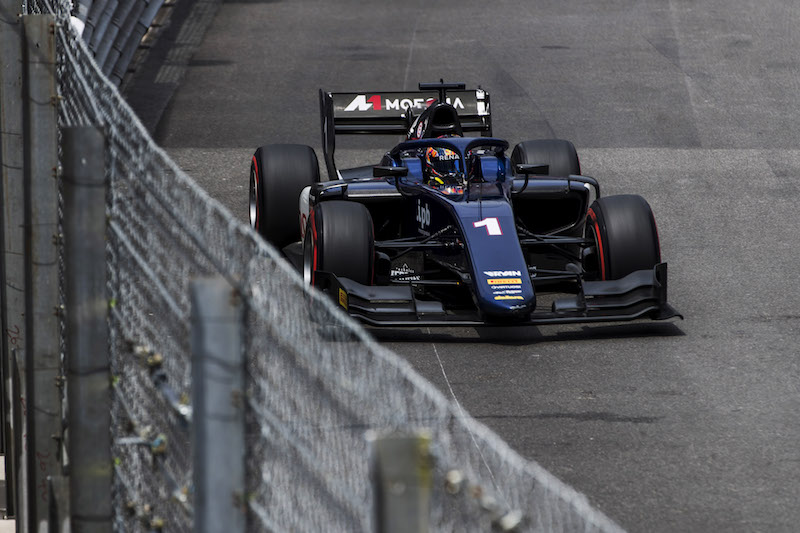 Albon led the race from his third consecutive pole position after making a good start, with de Vries close on his tail until the safety car came out for the second time on lap 14 of 42.

Up behind the safety car, Albon made a late decision to dive into the pits and collided with de Vries, who had made his intention to pit clear from the exit of La Rascasse and had his front wheels alongside the rear of Albon’s.

The contact spun Albon around in the pit entry and caused the DAMS driver to stall.

De Vries continued to pit and rejoined still seemingly in a strong position as the leading driver to have stopped, but when racing resumed he struggled with damage and fell down the order before being called to retire by his Prema team.

After running third in the early stages, Markelov had inherited the lead when Albon and de Vries headed to the pits together, and when de Vries faded, the Russian’s nearest challenger became the other Prema driver Sean Gelael.

From 12th on the grid, Gelael was up to sixth in the early stages, and crucially responded to a charging Lando Norris’s pit stop on lap seven to rejoin in front.

He then made a very good pass inside Ralph Boschung at Mirabeau when the Swiss driver emerged from the pits just in front of him.

At the end of that lap, Norris tipped Boschung into the barriers trying to make a pass at the final corner, causing the second safety car period and landing himself a drive-through penalty.

The safety car allowed those who had already pitted to close up behind those who had not, putting Gelael into a net race lead once he passed de Vries, but Markelov was able to lap faster on older tyres.

When he pitted on lap 35, Markelov rejoined around two seconds in front of Gelael, and extended that lead to over 10s by the chequered flag.

Like Gelael, Merhi and fourth-placed Louis Deletraz both benefited from making their pit-stops before the safety car.

Later stopper Arjun Maini finished fifth, having run fourth behind Markelov in the early stages of his first ever Monaco race.

Norris recovered from his penalty to finish in sixth and remarkably extend his championship lead over Albon (whose engine was refired by his DAMS mechanics but later retired) to 17 points.

After crashing and getting a penalty in qualifying, Norris had started 17th on the grid just behind another title rival George Russell, who had struggled after engine failure in his debut Monaco practice session.

Russell had made it up to 11th on lap six, when he went to the inside of Nirei Fukuzumi for 10th place at La Rascasse but couldn’t get his car slowed down and hit the barriers, ending his race.

His ART Grand Prix team-mate Jack Aitken finished in seventh place, having run long behind Markelov and Maini, to secure a place on the front row for the sprint race alongside Antonio Fuoco.

Fuoco was handed a drive-through penalty after putting fellow Italian Luca Ghiotto into the barrier and out of the race at the start when he aggressively swerved across from his fourth-place starting position, causing the first safety car period.

Everybody from Fuoco back had gained a place on the grid when Sergio Sette Camara was declared not fit to race.

The Carlin-run Brazilian had appeared to injure his hand when he crashed out at Sainte Devote at the end of qualifying.