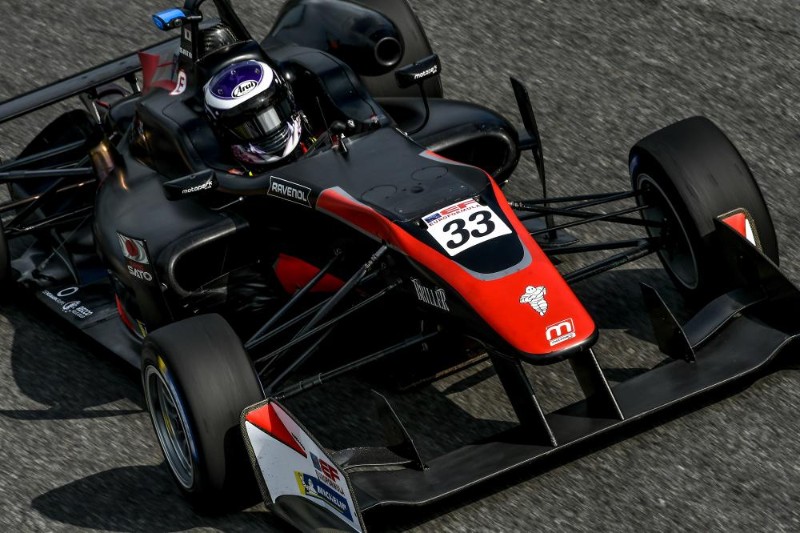 Euroformula Open champiion Marino Sato won a race-long slipstream battle at Monza, topping an all-Japanese podium in the first race of the weekend.

Double R Racing?s Linus Lundqvist started from pole but made a poor start, handing the lead to Carlin?s Teppei Natori. The Japanese driver quickly opened up a gap as a number of fierce battles took place behind.

Motopark’s Liam Lawson got crossed up at Ascari while trying to pass Nicolai Kjaergaard and fell down the order, leaving Natori leading team-mate Kjaergaard, Motopark duo Cameron Das and Sato and Lundqvist at the end of the first lap.

Das and Kjaergaard traded second place, with Sato then getting involved and completing a stunning move around the outside of Lesmo 2 on Das for third. Lundqvist then overtook Kjaergaard, and the quartet split into two pairs.

After several laps of minimised battling, Das and Sato closed onto Natori, and their three-way battle brought Lundqvist and Kjaergaard back into play. On lap 11 of 16, Lundqvist passed Das for third at Curva Parabolica, while Sato started a run of passing Natori down the pit straight and then conceding the position at the second chicane.

Honda junior Yuki Tsunoda was on a charge, and he was soon involved too to make it a six-way fight for the lead. Kjaergaard and Tsunoda passed Das on lap 13, and a lap later Kjaergaard moved past Lundqvist for third.

On the final lap, champion Sato repeated his usual Turn 1 overtake but this time kept the lead. Natori immediately had his mirrors full of Kjaergaard, who couldn?t find a way through and was passed for third place at the finish by Tsunoda.

Fortec Motorsports? Calan Williams finished 16th after Dunner moved across on him down the pit straight, while Lawson retired after being crashed into by Drivex School?s Rui Andrade at Turn 1.