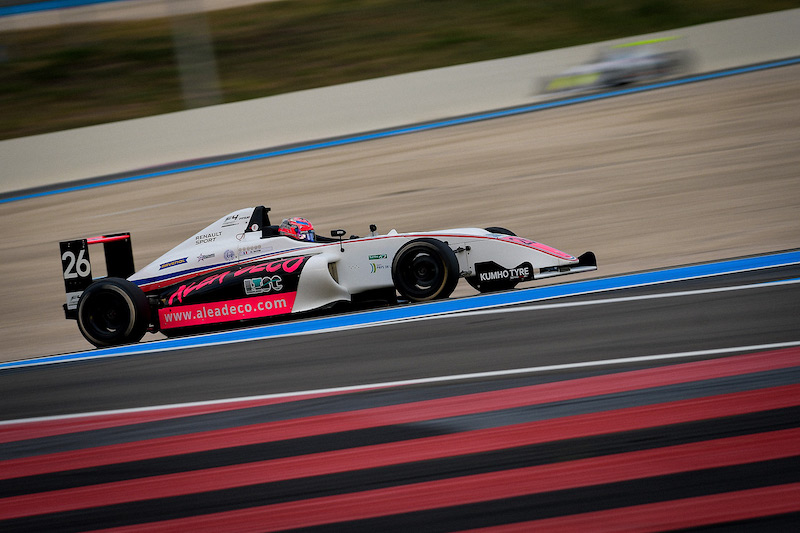 Hadrien David is the French Formula 4 champion after he took his seventh win of the season in the final round at Paul Ricard.

David took a 13.5-point lead in the overall standings into the final round and maximised his chances by claiming a double pole position in qualifying on Friday, while rival Reshad de Gerus mysteriously struggled to only 17th after he had lapped fastest in practice.

The pole-man led from start to finish in the first race of the weekend, keeping Victor Bernier at bay with just 0.35 seconds between the pair at the finish.

De Gerus quickly his way up to 12th position but would later have to retire following contact with Sten van der Henst.

With dropped scores taken into account – each driver losing their worst event score of the season – this put David 42.5 points ahead of de Gerus with a maximum of 42 left up for grabs from the final two races.

Nicky Hays finished the race third ahead of Ugo Gazil, with ace karter Sami Meguetounif a fine fifth in his maiden single-seater race.

Fellow newcomer Esteban Masson (this year’s French junior karting champion) was up to sixth ahead of Jules Mettetal before a mistake on the damp track dropped him back.

In the FIA-certified classification (discounting Junior drivers aged under 15 at the start of the season), David trailed de Gerus by one point coming into the weekend, but he clinched that title too with a third-place finish in the reversed-grid race two.

At the circuit where he won the Volant Winfield at the start of the year, Mettetal came from fifth on the grid to claim his maiden win and podium finish, passing pole-sitting Russian Vlasislav Lomko around the outside of Signes four laps in.

Mettetal won by 6.669s over front-row starter Enzo Valente, with David completing the podium after initially dropping to 11th on lap one.

Bernier’s stronger progress early on was interrupted by a clash with Simon Ohlin that put him off track, but he recovered to take fourth on David’s tail and ahead of Evan Spenle.

Bernier’s race one drive had already him the Junior title – a year after he won the World Junior Karting crown – with rival Isack Hadjar retiring following an incident at the start.