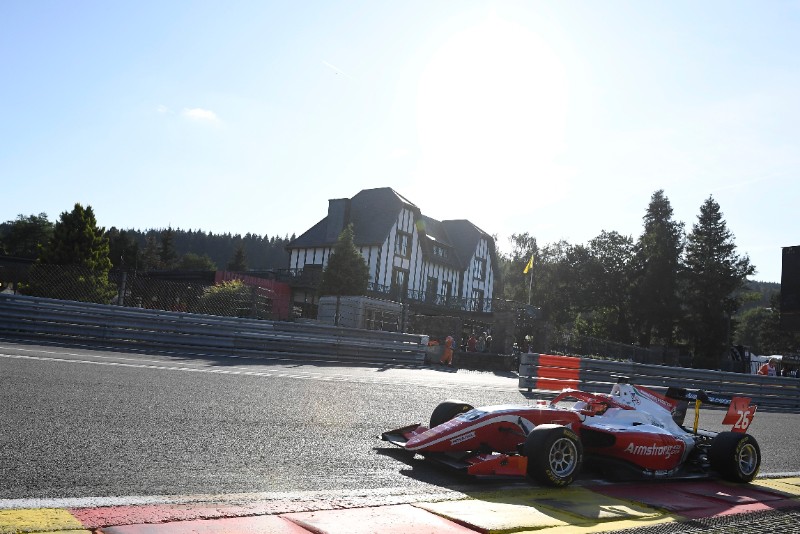 Starting from reversed-grid pole after charging from 19th to eighth in race one, Armstrong kept the lead?at the start, while Hitech duo Leonardo Pulcini and Juri Vips (who started second and fourth) were forced wide at La Source by Yuki Tsunoda locking up on their inside, the Jenzer driver claiming second place regardless.

Armstrong was 1.7 seconds clear at the end of the first lap, but his early lead was eliminated by a lengthy safety car following a big crash for Simo Laaksonen at Blanchimont.

Laaksonen had gone off after going side-by-side with Alex Peroni, his car ending up underneath the tyre barrier. Early reports, including over the team radio to Laaksonen’s MP Motorsport team-mate Richard Verschoor, indicated that the Finn was OK.

It took until the end of lap eight of 17 for the race to restart: a heavy rain shower had fallen in the meantime, but the track had dried once again.

Armstrong was again able to build a gap – aided by Tsunoda running wide at Raidillon – and was never troubled on his way to winning by 4.5 seconds. He dedicated his win to reigning GP3 champion Anthoine Hubert, for whom a minute’s silence was held prior to the race.

Tsunoda’s wide moment gave third-placed Christian Lundgaard a run on him, and the ART driver was furious over team radio after he being forced to get out of the throttle.

For several laps, Tsunoda was then unchallenged by the train of cars behind him despite their DRS advantage, but Lundgaard eventually got past on lap 14, and did well not to hit the back of Tsunoda’s car when he moved late to cover the middle of the road, with Lundgaard deftly getting down the inside.

Tsunoda would fight back though, going side-by-side on the outside a lap later and then getting back ahead on the inside one tour further on.

Shwartzman would also get by Lundgaard on the final lap, repeating his podium from race one and increasing his championship lead to 23 points over Jehan Daruvala, who took fifth.

The other main title contender Vips completed a weekend to forget BY dislodging his front wing against the rear of Max Fewtrell’s car under braking for the Bus Stop chicane at the restart, having slipped to ninth after the start.

He trailed home 21st after pitting. He is now 30 points behind Shwartzman, with Armstrong just two points further back.

Race one winner Pedro Piquet beat Pulcini to sixth, while Honda junior Teppei Natori took his first FIA F3 point in eighth – having just missed out by one place in race one – after keeping his Carlin team-mate Felipe Drugovich at bay.

Fewtrell stopped at Les Combes with a puncture with three laps to go, perhaps a legacy of the touch from Vips, while Jake Hughes was hit from behind at the same corner for the second race in a row, this time by Devlin DeFrancesco.

There was also a bizarre incident between Sauber Junior team-mates Raoul Hyman and Lirim Zendeli, who collided at Les Combes after going three-wide with Logan Sargeant, who went straight on with a puncture having touched Liam Lawson on lap one.