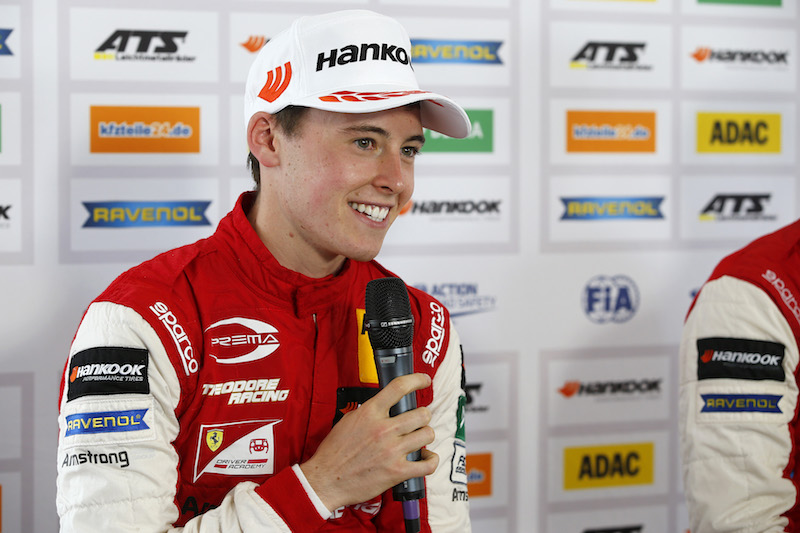 Ferrari protege Marcus Armstrong will stay with the Prema team to move into the new FIA Formula 3 Championship for next season.

The 18-year-old New Zealander was Italian Formula 4 champion and and second in Germany’s ADAC series with Prema in his first full year out of karts in 2017, and then stepped up to European F3 with the outfit.

He led the championship in the middle of his rookie F3 campaign before finishing up fifth in the standings.

Armstrong now moves to the new FIA F3 series that takes over from GP3 on the Formula 1 support bill, and will be part of a three-man team for Prema.

“This is an exciting step in my career, and this series is definitely the place to be for a young driver in terms of development and learning,” he said.

“Competition will be incredibly tight and everybody is looking forward to the new adventure. The car is obviously quite different to the Formula 3 we raced this year, not only the car itself but the engine and tyres.

“I have the right people around me to get on top of these details quickly though. Together we shared a lot of success in recent years, winning the 2017 Italian Formula 4 Championship and fighting for the German series title.

“We had a great 2018 too but I feel there is unfinished business and I’m very excited to get going.

“The new FIA F3 is new for everyone, including us, but I feel confident in our team that we can hit the ground running in 2019.”

Armstrong is expected to be joined by fellow Ferrari junior Robert Shwartzman in the Prema FIA F3 line-up, while long-time Force India protege Jehan Daruvala has also been tipped to join the team.

“It is great to line-up with Marcus for another season,” said team boss Rene Rosin.

“He has huge talent and has been a championship contender in every single series he took part in so far. We know we can aim at some outstanding results together and we want to carry our winning legacy into the new era of Formula 3.

“I want to thank Marcus and the Ferrari Driver Academy for their renewed trust. Our partnership achieved amazing results, but we won’t back down and we are hungry for more!”

Armstrong sampled the outgoing GP3 car in the Abu Dhabi test last week with the Charouz and Trident teams.