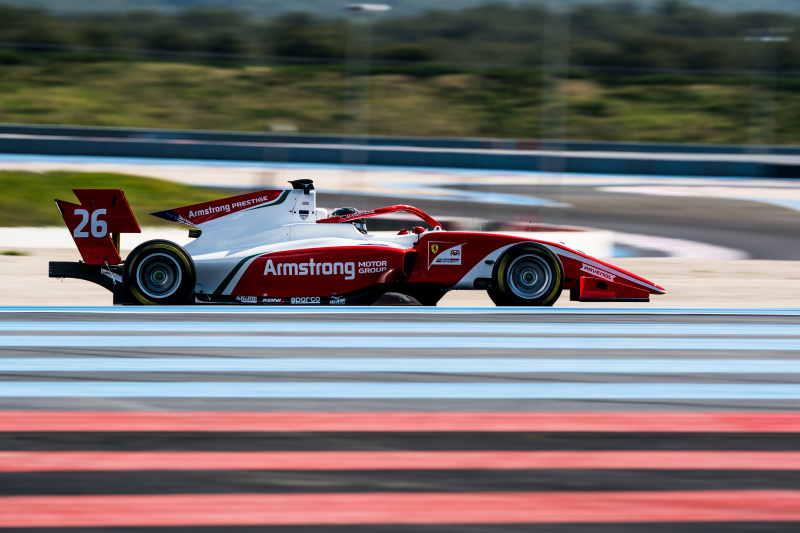 Prema?s Marcus Armstrong was fastest in the first day of pre-season testing for the new FIA Formula 3 Championship at Paul Ricard.

Ferrari Academy driver Armstrong was only 15th in the morning session but found more than two seconds to vault himself up to the top of the timesheets by the end of the day with a time of?1m49.243s.

Fellow Prema and Ferrari junior Robert Shwartzman was third in both sessions. The drivers sandwiched Sauber Junior Team by Charouz driver Lirim Zendeli, who posted his fastest time, which was three tenths off Armstrong?s best, late in the session.

Leonardo Pulcini, driving for Hitech, ended the day fourth, after setting the second-fastest time in the morning.

The relatively clean morning of running was only really halted when MP Motorsports? Richard Verschoor and Trident?s Devlin DeFrancesco stopped simultaneously on the circuit.

Red flags were brought out twice in the afternoon after Carlin Buzz Racing?s Logan Sargeant and later Hitech?s Juri Vips came to a halt at different points in the session.

Vips ended the day a somewhat unrepresentative 29th in the afternoon, after setting the fifth-fastest time in the morning. Sargeant ended the day 13th.

Campos? Sebastian Fernandez, ART?s Christian Lundgaard (who was fastest in the morning) and David Beckmann, and Prema?s Jehan Daruvala rounded out the top 10 at the end of the first day, all setting times below the 1m50s barrier.