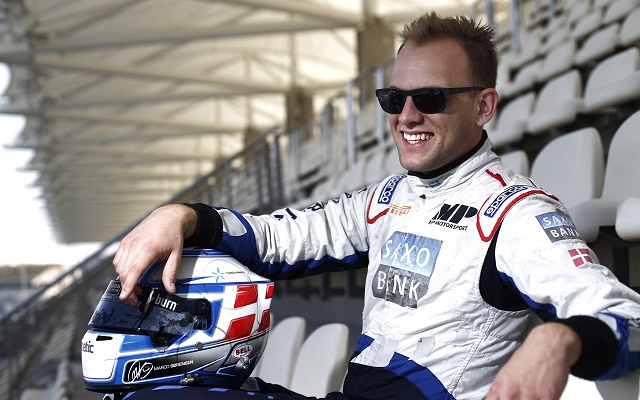 The 24-year-old Dane, who also announced his participation in the World Endurance Championship’s GTE-Pro class earlier this month, will partner Colombian racer Julian Leal in the British squad.

Sorensen’s full-time switch to GP2 follows on the heels of a seven-round schedule in 2014, during which he delivered MP Motorsport’s first win in the series in the reverse-grid race at Sochi.

A Lotus junior since 2012, he contested three seasons of the Formula Renault 3.5 champonship, but sixth in his rookie year would remain as his best result.

Prior to that, the prolific Dane was a race winner in ADAC Formel Masters, German F3, British Formula Ford and FR2.0 NEC.

“I am hugely excited to be joining Carlin for the 2015 season in GP2,” said Sorensen. “The team has a great reputation and I feel I have some unfinished business in the series.? Together I expect us to be aiming for top results.”

“My thanks go out to Gravity Sports Management and Saxo Bank, without whose support this attack on the GP2 championship would not be possible.? We?re focussed on working hard now to prepare for the season ahead and the first tests in Abu Dhabi.”

Having joined GP2 in 2011, Carlin Motorsport recently became a major force in the series, finishing runner-up in 2013 and 2014 and helping launch Max Chilton and Felipe Nasr into F1.

“We are extremely happy to complete our GP2 team with the signing of Marco,” stated Trevor Carlin. “He is undoubtedly a very quick driver and in the right environment I have no doubt that we will see him flourish.”

“In addition, we know him to be a great driver to work with and together with Julian we expect to have a very productive working environment in which to strive for further success in GP2.? We are delighted that Marco?s sponsors and the Lotus F1 Team have shown the belief in us to take Marco to the next level of his career.”