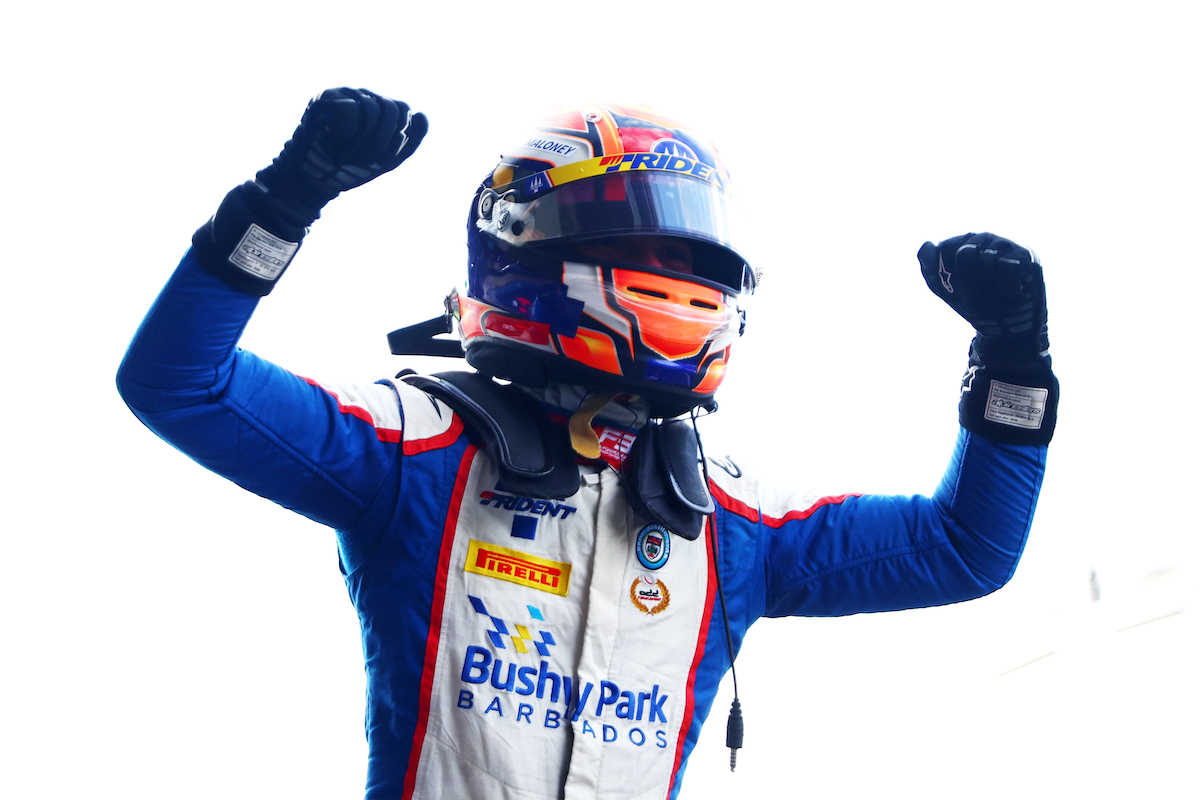 Zane Maloney has claimed his second FIA Formula 3 feature race victory in a row, winning at Zandvoort after losing the lead to Victor Martins in the first corner.

The Trident driver is now fifth in the standings, sitting just 24 points behind ART Grand Prix’s Martins, who reclaimed the championship lead ahead of next week’s season finale at Monza.

Maloney moved to the right straightaway as he tried to defend first place, but Martins had already taken the inside line into turn one.

The Barbadian then attempted to hold on around the outside. However, he ran over the kerb at the exit of the corner and went wide into the gravel and grass, but kept the car under control, just losing the lead to Martins.

The safety car was out on lap four as Carlin’s Brad Benavides ran into the back of Jenzer’s William Alatalo at turn two, sending both of them into the barrier.

The race resumed at the end of lap seven leading to lots of on-track action in the following lap. Prema’s Jak Crawford missed the braking point as he attempted to go around the outside  of Maloney in turn one for second place, and ran wide dropping back to ninth.

Trident’s Jonny Edgar also lost out at the restart, going from sixth to eighth as MP Motorsport’s Caio Collet and Campos Racing’s Sebastian Montoya overtook him at turn three.

Martins soon struggled for pace and lost the lead of the race on lap 12. The Alpine junior defended the inside against Maloney but went slightly wide, which allowed his rival to take the place. The Frenchman was then under pressure from Van Amersfoort Racing’s Franco Colapinto, but held him off until the end.

The virtual safety car was deployed on lap 18 to pick up the Campos Racing car of David Vidales, who had stopped in a run-off area, and would then become a full safety car to clear ART GP Gregoire Saucy’s nose cone end, which had come loose.

The race went green again with six laps to go, and drivers tried to make the most out of every opportunity to make up places. Prema’s Ollie Bearman snatched 10th position away from Carlin’s Zak O’Sullivan with a very aggressive move at turn nine, after having gained another two places in the previous corners.

A third safety car was brought out on lap 22 as VAR’s Rafael Villagomez was beached at turn one, after being spun round by ART GP’s Juan Manuel Correa.

The race would resume two laps from the end, and Crawford passed Collet to come home in sixth after his mistake earlier in the race.

Ahead of them, Roman Stanek finished fourth and Isack Hadjar fifth. Martins leads Hadjar by five points heading to Monza, with Stanek 17 points away from the lead.