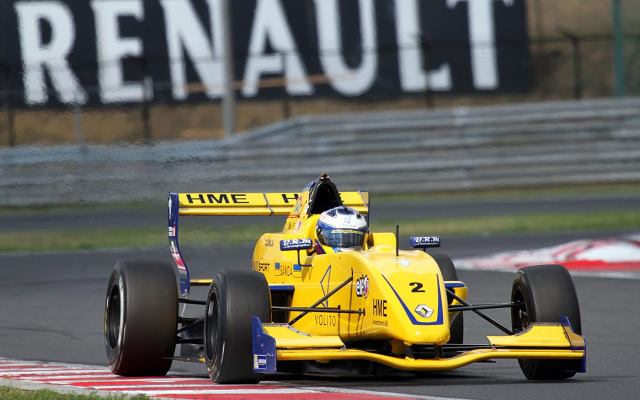 Gustav Malja has re-signed with Josef Kaufmann Racing’s Formula Renault 2.0 squad for a dual campaign on the Eurocup and NEC in 2014.

After finishing runner-up to Marvin Kirchhofer in ADAC Formel Masters in 2012, the Swede joined the Eurocup with Kaufmann and finished 20th in last year’s standings with a solitary points finish.

He also contested three rounds of the NEC with the team and scored two podium finishes.

While his main focus this year will be on his sophomore campaign in the Eurocup, he will also enter the NEC on a full-time basis in order to boost his experience and give him a total of 14 race weekends.

“I?m looking forward to a second year in Formula Renault with Josef Kaufmann Racing,? said the 18-year-old, who has gained Renault’s Nordic division as a partner for 2014.

?I learned so much last season, and the Eurocup in particular is incredibly competitive. To remain in that environment, and to double up with a full campaign in the NEC, will give me plenty of opportunities to race against the best at this level of motorsport, and provide the platform I need to continue to grow as a driver.

“Winter testing has gone very well for us so far, and I obviously intend to carry that form into the new season. I know that it will take a lot of hard work, but I?m definitely up for it and ready to go.?

Kaufmann – whose team carried Robin Frijns and Stoffel Vandoorne to back-to-back Eurocup titles in 2011 and 2012 – added: “We are excited to have Gustav on board for the second year running. He matured a lot last season, showed an increasing understanding of the car and tyres and finished on the NEC podium twice ? which was everything we expected of him in his maiden Formula Renault campaign.

“We are fully confident that he?ll be able to draw on the experience he gained ? and his inherent talent ? to establish himself among the frontrunners this year.?

Malja joins Ryan Tveter?at Kaufmann for this season’s Eurocup, while he will be partnered by Louis Deletraz in the team’s NEC assault.