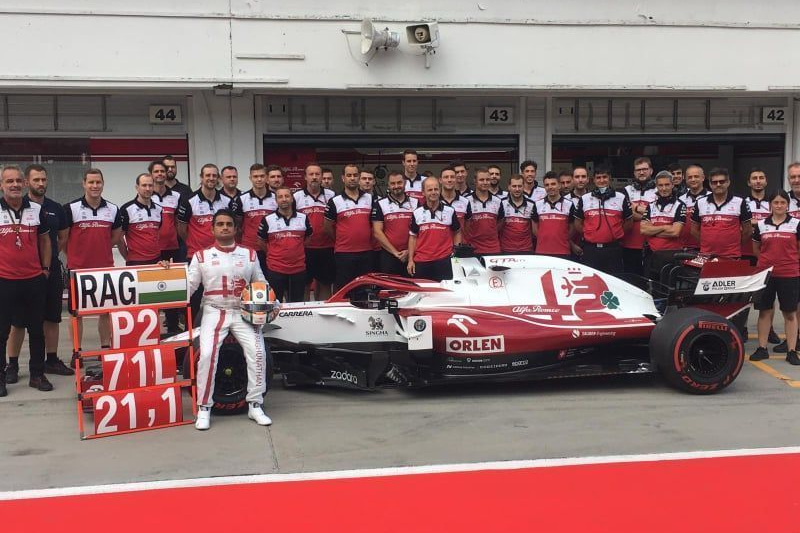 The Indian is currently seeking a return to F2 after racing in the series two years ago, when he earned a reputation for being below the level of his competitiors as he picked up a race ban and scored one point in 20 races.

He hasn’t been active in motorsport since then, but did a full day in the Alfa Romeo C38 earlier this week alongside Theo Pourchaire – protege of the Sauber group that runs the team – and was 1.9 seconds slower than the Frenchman.

For both it was their first ever runs in an F1 car, with Raghunathan completing 71 laps on Tuesday before Pourchaire took over the car on Wednesday. Both learned the car on Sauber’s simulator in Switzerland prior to the test.

Raghunathan was Auto GP title runner-up in 2016 and was champion of BOSS GP’s Formula class in an A1GP car before he raced in F2, while Pourchaire won two Formula 4 titles then came second in the FIA Formula 3 Championship as a rookie prior to stepping up to F2 with ART Grand Prix for this season.

Pourchaire described his test as “a dream came true”, and he is among several drivers in contention for a seat at Alfa Romeo next year along with the team’s current line-up and F2 rival Guanyu Zhou who is a junior driver of the Alpine F1 team.

There may be another opportunity for Pourchaire and Raghunathan to test an F1 car this year, as Yas Marina Circuit is expected to remain in its current spot as the host of the final race of the F1 season now that its quarantine status has been changed for the United Kingdom, and means a post-season test is likely to take place there.

However if it ends up swapping dates with Saudi Arabia’s Jeddah street circuit, currently set to host F1 a week before in December, then it’s unclear if the traditional post-season test would take place as an all-new set of technical regulations is being introduced for 2022.