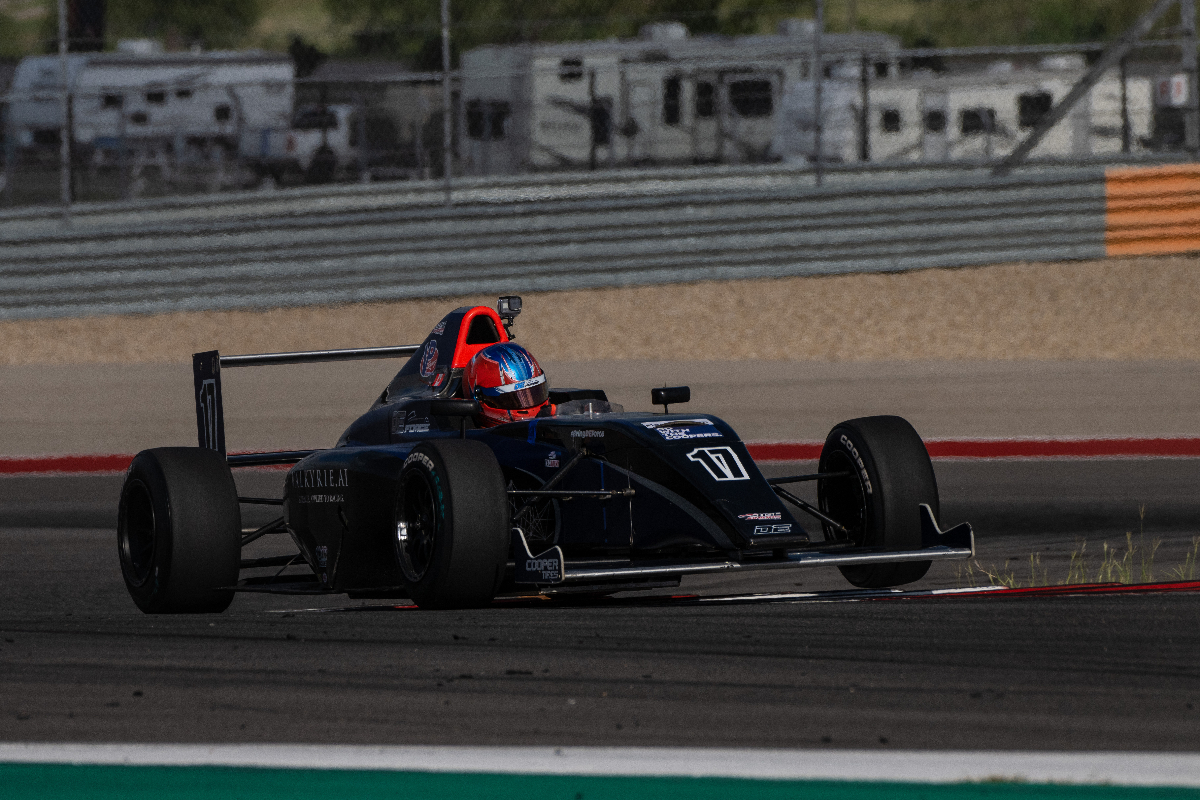 Mac Clark became the first USF Juniors champion with a trio of podiums in the season finale at Circuit of the Americas.

A reported fuel pump failure in qualifying made it a tricky job for the DEForce Racing driver to seal the crown, as it meant he started each race from the back.

Velocity Racing Development’s Sam Corry took pole, but his use of COTA’s ‘non-track limits’ for this weekend meant he was promptly pased by team-mate Nikita Johnson after running wide at turn one.

Johnson looked like he was going to build a gap but the pace car was called out for a lap. On the restart, Andre Castro squeezed himself into second past Alessandro de Tullio, and they swapped places again before Castro spun him around in the Esses.

Castro was handed a 30-second post-race penalty for the collision, and continued in a distant second place behind Johnson until a another pace car period due to Corry spinning. Castro had dropped to sixth, with Ryan Shehan and Mac Clark moving up and attacking Johnson into turn one but then running wide.

Johnson earrned his second series win with 2.4s in hand over Clark. Bryson Morris beat Corry to third in a photo finish by 0.04s, and Shehan was just behind in fifth. Castro was sixth on-the-road but his penalty dropped him to 16th, with Ethan Ho getting an identical penalty that sent him from seventh to 17th.

Johnson claimed race two pole but this time could not turn it into victory, immediately being swamped into turn one by de Tullio and Morris, who went either side and demoted him to third.

The pace car came out due to two opening lap incidents, one which left Ho’s car grounded on track for several minutes and caused the race to be red flagged. Morris took the lead at the restart and held on until the final laps when the lead group grew into a seven-car fight.

Corry managed to pass Morris in the final sector of lap 12 of 15, then pulled away from the pack at the end as a diving move from Johnson for second fanned them out behind. The desparation in the lead group escalated as at the final corner an attempted pass led to a scary multi-car crash with Shehan flipping de Tullio.

Johnson finished second on-the-road behind Corry but a 30s penalty for avoidable contact, which de Tullio was penalised for too, dropped him to 10th and Morris and Clark filled the podium instead.

Race three pole also went to Johnson, and he held on to the lead until lap five when Shehan and Corry went around his outside. He reclaimed second at turn nine, then returned to the lead through the esses on the next lap.

Johnson pulled away until the pace car returned, and in the time after the restart the huge squabbles that were going on behind enabled him to finish 2.189s clear of Corry. A double move by Clark earned him third, and title glory.