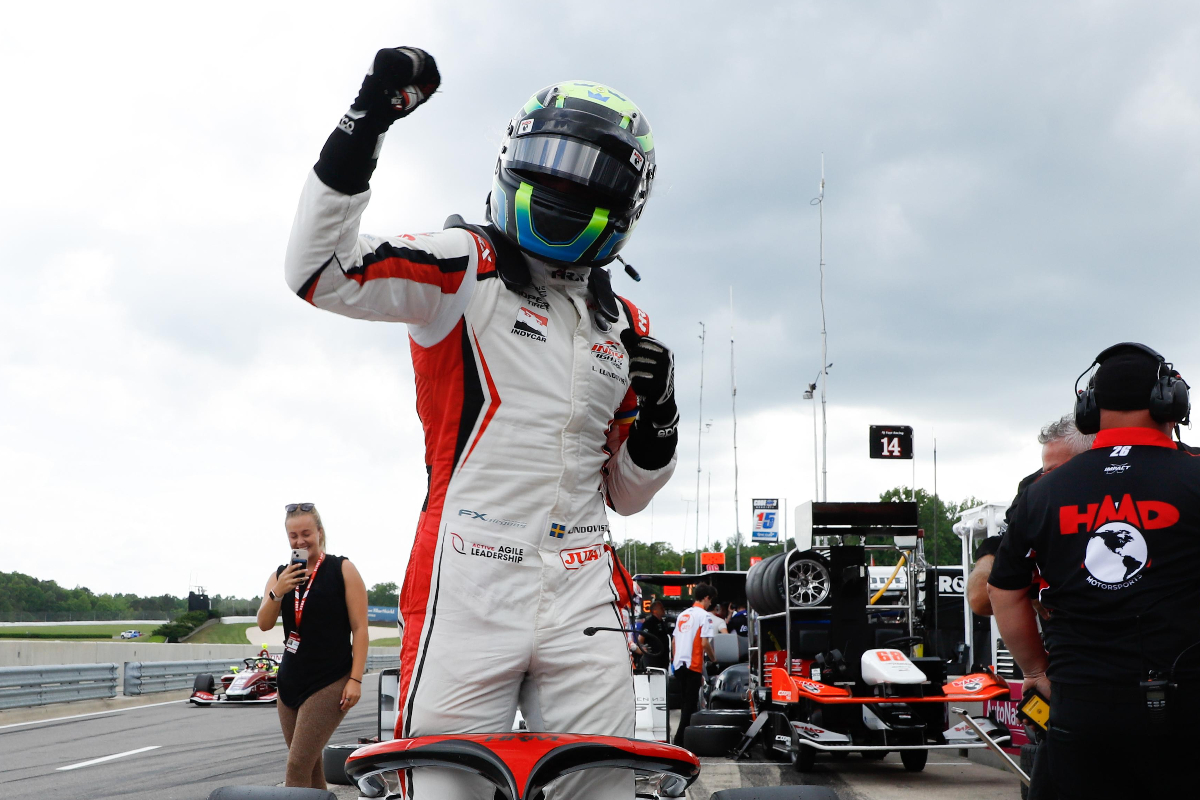 Heavy rain and lightning shook up the Sunday schedule and meant Indy Lights’ race was shortened to 45 minutes. Kyffin Simpson had to change his steering wheel pre-race, and a single file rolling start was called for to start the action in the wet.

In limited visibility Lundqvist had it easiest up front, except was also finding the puddles first, and he lead his HMD Motorsports team-mate Benjamin Pedersen, who is co-run by Global Racing Group through lap one.

Christian Rasmussen passed his Andretti Autosport team-mate Sting Ray Robb for third, while the team’s third driver Hunter McElrea squirmed around and dropped from fifth to seventh. HMD’s Danial Frost then demoted him to eighth at the start of lap two.

Lundqvist pulled away by 2.5 seconds in the first five laps, before HMD’s Christian Bogle got beached in the final corner gravel and the pace car was summoned. The sun came out at this point, with some drying areas at the restart.

The top two broke away again, but this time Rasmussen slid off and dropped to seventh ahead of HMD’s Danial Frost, who had been passed by pre-race championship leader Matthew Brabham who with Manuel Sulaiman had chased down Simpson for fourth.

The track was starting to fully dry mid-race, with drivers sliding now looking for the water to keep their grooved tyres cool.

Sulaiman kept Brabham at bay until a brave move at turn seven, and then almost pushed Rasmussen off as he tried to defend from him at the chicane. On the next lap Brabham cleared Simpson, while Rasmussen rear-ended Sulaiman at the hairpin and lost his front wing, requiring a pitstop where he also replaced his front-left tyre.

Sulaiman fell behind Frost and McElrea, who both then passed a spinning Brabham, in the next laps got picked off by Jacob Abel and Ernie Francis Jr too.

Brabham recovered finely, chasing down and passing McElrea and Simpson over the next three laps, with McElrea following him past Simpson for fifth with a brave move at the chicane.

Frost had already cleared Simpson, but had the chasing Andretti drivers back on his tail after a few laps while Simpson had dropped back massively as his grooved tyres overheated.

The pressure behind ended when McElrea and Brabham crashed at the hairpin, both spinning into the grass. Brabham eventually got going again in seventh, while McElrea chose to retire.

Meanwhile Pedersen had been getting closer and closer to Lundqvist as the track dried, and was a third of a second behind entering the final lap. He looked at making a move into the penultimate corner, then nerfed Lundqvist’s gearbox on the run to the chequered flag, and finished just 0.1782s behind.