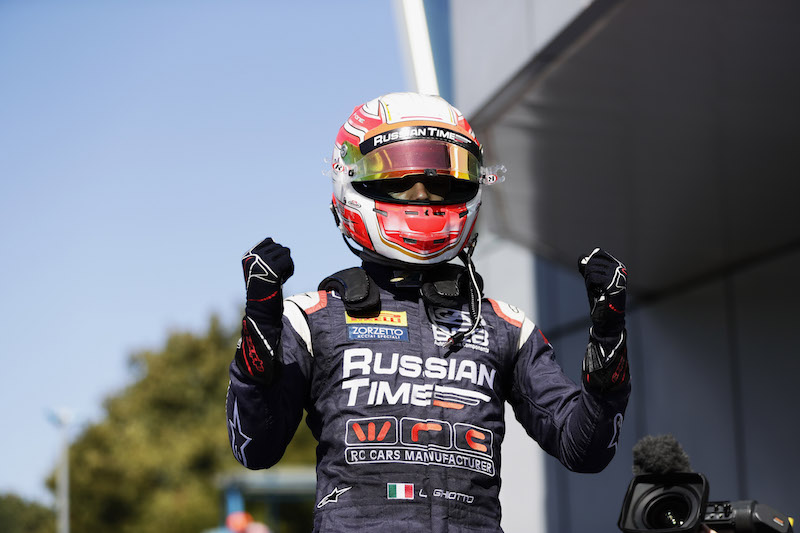 Luca Ghiotto made up for being stripped of victory in the Formula 2 feature race at Monza by winning the sprint race from fifth on the grid.

In the feature race, the Russian Time driver was penalised for cutting the first chicane and gaining an advantage on the final lap of the race.

However, he responded in perfect fashion by taking victory. Although he did not gain places from the start, he soon started making his way through the field.

After passing pole-sitter Gustav Malja in the early stages of the race, he then took advantage of Sergio Sette Camara passing Sean Gelael at the first Lesmo to follow the Brazilian driver through for third.

He then overhauled Sette Camara before catching and passing Louis Deletraz for the lead.

Ghiotto was joined on the podium by Sette Camara and Antonio Fuoco, completing a double podium for the Prema driver at his home race.

Deletraz, who was fighting Gelael for the race lead in the opening stages, was fourth ahead of Roberto Merhi. Gelael came home sixth ahead of ART duo Nobuharu Matsushita and Alex Albon.

Championship contenders Charles Leclerc and Oliver Rowland finished ninth and 11th respectively. Leclerc was suffering from front wing damage so while he was able to make overtakes in a train caused by Nicholas Latifi, he was unable to keep hold of positions.

In the train, Leclerc, Albon, Markelov, Matsushita and Latifi were all fighting for position, with some ambitious moves through Lesmo section in particular.

It meant Leclerc, and Rowland, came away from the Monza weekend without any points.