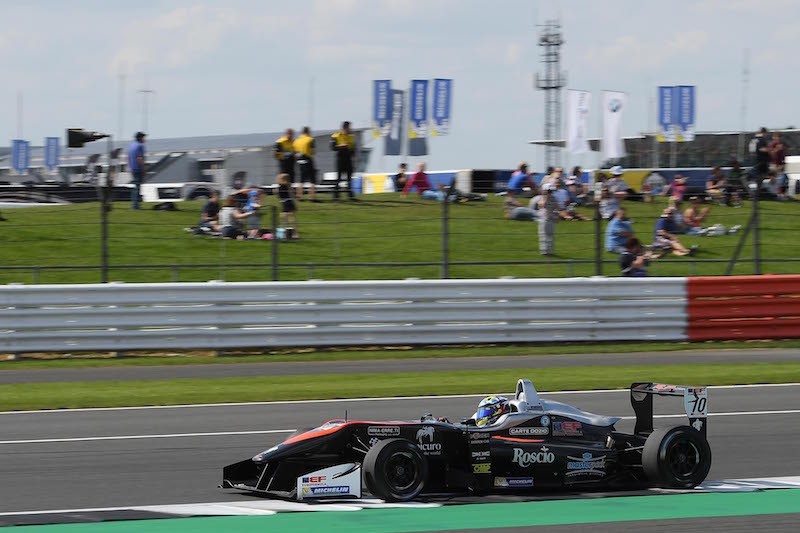 Although Scott?s margin of victory was not as large as it was the day before, it was still a composed drive for the championship leader.

Euroformula Open?s ban on tyre warming meant the track was still slippy to drive on, and by the time the Michelin rubber was at optimum temperature it was already degrading for several drivers.

Scott was unfazed though, and he met the chequered flag first for the eighth time this season with 11 seconds to spare over DeFrancesco.

?Both wins, poles and fastest laps this weekend. Incredible team effort all round,? said the winner.

?[The race] was a lot more difficult than yesterday. There were higher winds, especially through Turn 1, it was a real strong crosswind which was making the car a little unstable.

?A few laps from the end there was a few spots of rain on the visor.?

Jannes Fittje made his second podium appearance of the season in third, ahead of Fortec team-mate Ben Hingeley and the struggling Nikita Troitskiy.

Hingeley?s car, which hasn’t raced since the first round at Estoril, required an ECU update prior to the race, after the team discovered why he had been consistently losing pace.

Alex Karkosik made a poor start from third and never recovered, ending the race in sixth.

Seventh went to Thiago Vivacqua, although it could’ve gone to either of his Campos team-mates Cameron Das and Matheus Iorio, who crashed into each other at Brooklands on the first lap.

Ameya Vaidyanathan was eighth, with Lodovico Laurini and Christian Hahn rounding out the points after Petru Florescu and Tarun Reddy crashed into one another on the final lap.

Simo Laaksonen struggled all race but in the end was only eight tenths off the points in eleventh, with Florescu finishing just behind him.

With six races to go there are still six drivers in title contention, although nobody would bet against Scott taking the championship trophy.