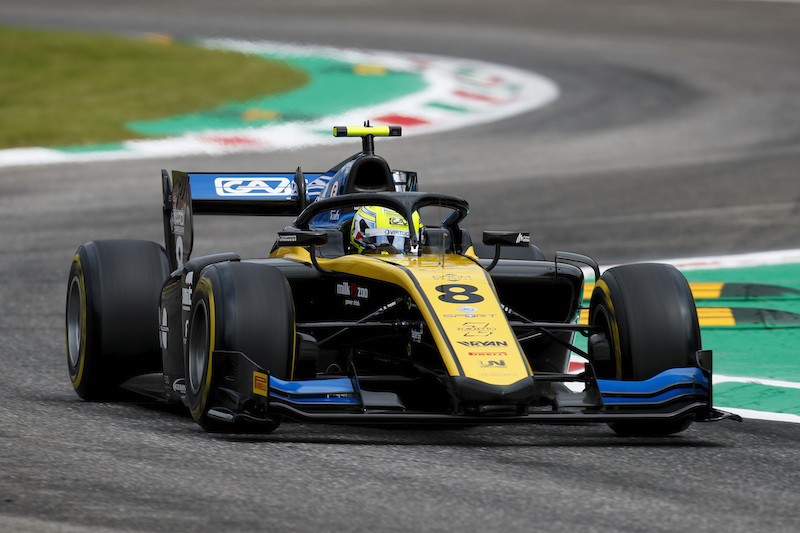 Virtuosi Racing’s Luca Ghiotto topped the timesheet in Formula 2 practice ahead of his home round at Monza, but is under investigation along with team-mate Guanyu Zhou for using a wet tyres in the session.

The track was partially damp at the start of the 45-minute practice, but the session was not declared wet by race control. While the rest of the field carried out installation laps on dry compound tyres, both Virtuosi drivers completed their first laps on the wet tyre, and were soon placed under investigation by the stewards.

Practice was effectively reduced to a 20 minute session, as Ferrari junior Callum Ilott, Marino Sato and Mahaveer Raghunathan were the only drivers to set times in the early stages.

When the rest of the field emerged, championship leader Nyck de Vries set the benchmark pace and was 0.8s clear of the field after his second timed lap.

But his advantage was quickly eroded and de Vries opted to abort a lap which would have seen him extend his lead at the top of the times, recording a session best sector two split, with five minutes to go.

Ghiotto then posted a 1m33.017s time to vault to first, edging de Vries by 0.103s – a pacesetting effort that was not beaten.

Renault junior Jack Aitken was fifth for Campos, ahead of Williams reserve and championship challenger Nicholas Latifi and the second Virtuosi of Zhou in seventh.

Mick Schumacher and team-mate Sean Gelael ended up eighth and ninth for Prema while early pacesetter Ilott rounded out the top 10.

Only 17 cars have been entered into the Monza round following the tragic events at Spa-Francorchamps. Arden, Trident and the Sauber Junior Team by Charouz field just one car each this weekend.