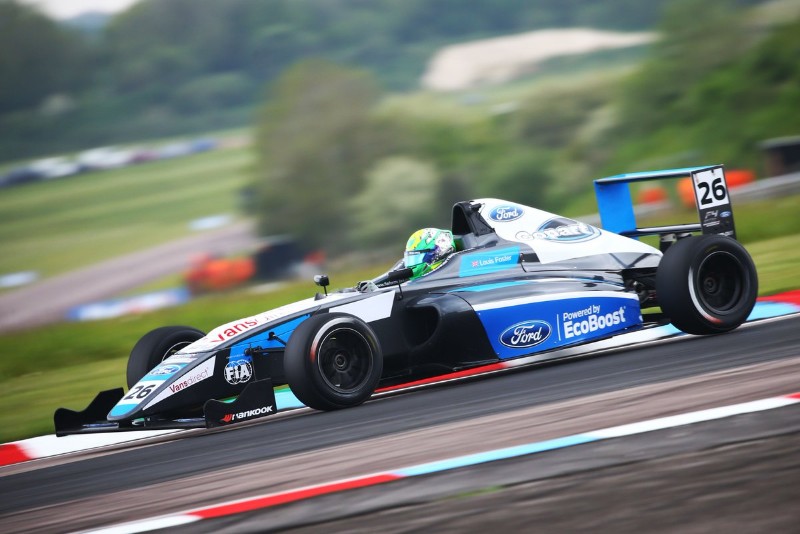 Louis Foster ended his British Formula 4 podium drought at Thruxton, despite initially being reluctant to push the limits.

The Double R Racing driver was off the pace in the qualifying session that set the grids for races one and three, putting him on the backfoot again after two rounds where he had only finished in the top five twice.

He was able to bounce back with his first podium since the summer break in race three at Thruxton, but a difficult race one and two meant he fell further behind team-mate Sebastian Alvarez and Carlin’s Zane Maloney in the championship standings.

?In qualifying I struggled a little bit,? Foster told Formula Scout. ?I?ve had a big accident around this track in the past. In one of the corners it was slightly wet, and I wasn?t as brave as I should have been, which meant I qualified ninth.

?From then on, the races were unfortunate because of that.?

Foster was caught up in incidents in both of the first two races. In the opener, he was involved in contact that damaged his front wing and dropped him out of the points. Starting from 12th in race two, Foster recovered several positions early on, but then retired with a left rear puncture.

?In race one, starting so far back, I got backed up by a load of cars and lost my front wing.

?The next race, coming up through the field I got a puncture. I would say a bit unlucky but we should have performed better in qualifying.?

Despite the struggles, Foster was pleased to end the weekend with a third place finish and minimise the points loss after eight races off the podium.

?I?m glad to get the drought over and done with,? he said. ?It was a good race, quite tough but we?re going to keep propelling ourselves from here.

?[I?ve had] quite a few bad last events; the first few races [at Thruxton] were very poor. Snetterton was quite bad as well, I think that was the worst ever weekend in my career. To come from such a low and get a pretty big high now is really good.?