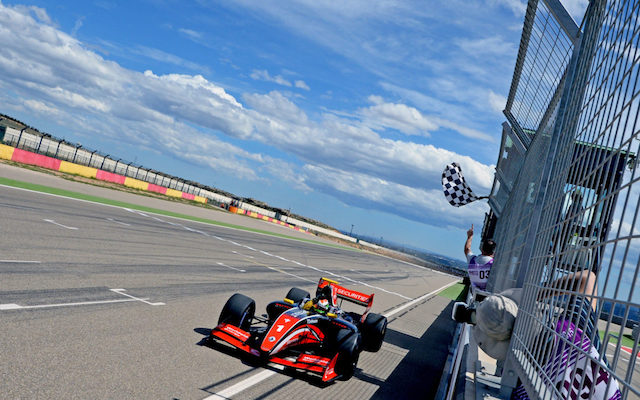 Louis Deletraz has won the first race in the Formula V8 3.5 era, capturing?a dominant victory in his debut drive for Fortec Motorsports in Saturday’s first race at Motorland Aragon.

The race took a dramatic turn right from the opening sequence of corners, as polesitter?Egor Orudzhev ran wide from the lead, hit the kerbs trying to re-join the track, and suffered heavy, terminal damage that ended the Russian’s race. Teo Martin Motorsports’?Yu Kanamaru was the only other retirement of the race.

Orudzhev’s error allowed Deletraz to drive well away from the field by as much as 15?seconds by the end of the race. Further back, however, there were far more heated battles for position. It came down to the last lap as?Matthieu Vaxiviere, last year’s championship runner-up, fought his way up from a lowly tenth on the grid to finish second, just barely holding off fellow Frenchman?Tom Dillmann.

Rene Binder finished fourth in his debut Formula V8 weekend for Lotus, finishing just ahead of sophomore?Aurelien Panis.?Alfonso Celis Jr.?was on pace to finish on the podium, until a late error and potential fatigue forced him to drop all the way down to sixth.

The most interesting fight of the race was contested in the lower end of the points.?Roy Nissany finished seventh, RP Motorsports rookie driver?Vitor Baptista finished eighth,?Beitske Visser was ninth in her first drive for Teo Martin, and?Johnny Cecotto, Jr. completed the top ten in his return to racing after a stop-start 2015.

All of them had to deal with the stingy, yet very clean defensive driving of?Pietro Fittipaldi, who spent most of the race in the points despite a heavily damaged front wing from an earlier incident. Ultimately, Fittipaldi finished just outside the points in 11th.