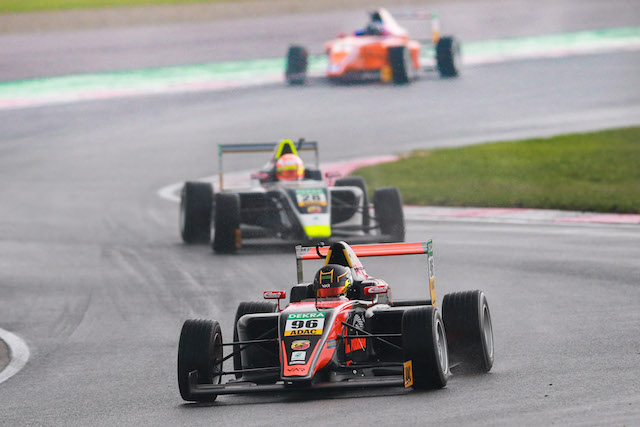 The race itself was delayed after it was declared wet due to the damp track. Despite the warning, several drivers gambled on slick tyres for the race.

The race started under safety car, but once it pitted?it was Mawson who made the best start to get clear of US Racing’s?Kim-Luis Schramm and Jannes Fittje to keep the lead into Turn 1. Early passing manoeuvres saw Mick Schumacher overtake team mate Juri Vips, only for the pair of them to be overtaken by?Moritz Muller-Crepon.

Several drivers spent the first lap spinning on the damp track, but all were ultimately able to continue. This included Job van Uitert, who spent most of the first few corners heading?backwards through the grass at high speed. The luck soon ran out for the spinning drivers however, as both Simo Laaksonen and?Juan Manuel Correa spun off the track and couldn’t rejoin to bring out the second?safety car of the race.

At the restart, Schramm was much closer to Mawson through the final turn, but couldn’t find any room to pass the Australian going into the first corner. Schumacher on the other hand used this opportunity to get back past Muller-Crepon for fourth place.

Slick tyre starters?Mike Ortmann and team mate?Lirim Zendeli left the track at the end of the back straight in separate spins, beaching both cars in the gravel. This brought?out the third appearance of the safety car.

With three minutes left on the clock, the safety car pulled off the track one last time, with Mawson once again having a great start to pull away from Schramm to take the win.

Fittje came under increasing pressure from Schumacher but kept third position ahead of the Prema driver at the chequered flag. Muller-Crepon finished fifth ahead of?Lechner Racing pair?Thomas Preining and?Michael Waldherr.

Earlier, Luca Engstler won the new qualifying race for drivers outside the top 22 in qualifying, ahead of Jonathan Aberdein and Mauro Aurrichio. With a maximum grid size of 36, two drivers needed to be?eliminated, and they were the last?finisher Marilyn Niederhauser and non-finisher?Oliver Soderstrom, the?Nordic Formula Renault 1.6 champion.