Bird made his racing debut in Formula BMW UK in 2004 with the Carlin team, taking one win, finishing 14th overall and 2nd in the rookie classification. The following year he finished second overall, driving for Fortec Motorsport, winning six times. A year in Formula Renault UK with Fortec followed, where he finished 4th overall and top rookie.

Bird graduated to British Formula 3 for 2007, returing to Carlin. He scored two victories on his way to 4th overall. He was once again the top newcomer. That year he also conducted a four day aero test with the Williams F1 team. A made the move to mainland Europe and the F3 Euro Series for 2008, racing for another established British team in Manor Motorsport. He suffered a tough year, finishing down in 11th in the final standings. He switched to Mucke Motorsport for 2008, but he could only improve to 8th overall, still without a win in the Euro Series.

Despite his tough two year spell in the Euro Series, Bird still managed to impress the bosses at ART Grand Prix. The French team paired him with Euro Series champion Jules Bianchi in their GP2 lineup for 2010. Despite suffering some rotten luck during the course of the year he finished fifth in the final standings, taking his maiden win in the category in the final feature race of the season at Monza. At the end of the year he was given the chance to test for Mercedes GP at the Abu Dhabi Young Driver tests.

With Bianchi unable to move up to Formula 1 and inaugural GP3 champion Esteban Gutierrez deserving of a graduation within the ART ranks, Bird’s year at ART was always destined to be his only. He was able to secure a spot at former champions iSport, and after almost matching title favourties Bianchi and Grosjean during the Asia Series, he took a double podium finish at the season opener at Istanbul with some brilliant overtaking moves. As a result, he leads the standings, level on points with Grosjean.

Talent rating: Bird showed good promise in his early years, but he struggled in Euro F3. He pulled off a bit of a coup by getting the ART GP2 drive for 2010, and has impressed with the way that he has immediately become a frontrunning contender. 8/10

Chances of getting to F1: Despite taking his time to climb the ranks, Bird is one of the main contenders in GP2 and winning the title would make him a hot property. Promising British drivers often lack funding, but Bird has a large range of personal sponsors adorning his GP2 car. They could be collectively providing the full ?2million required for a season of GP2 these days. If he can bring these sponsors onto the table when negotiating with F1 teams, he’ll be very hot property indeed. A strong end result in GP2 is a must though. 8/10 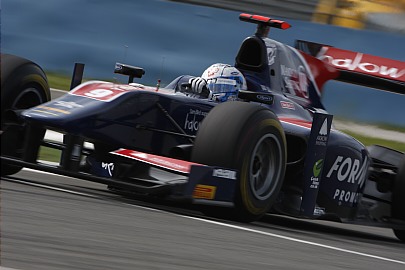