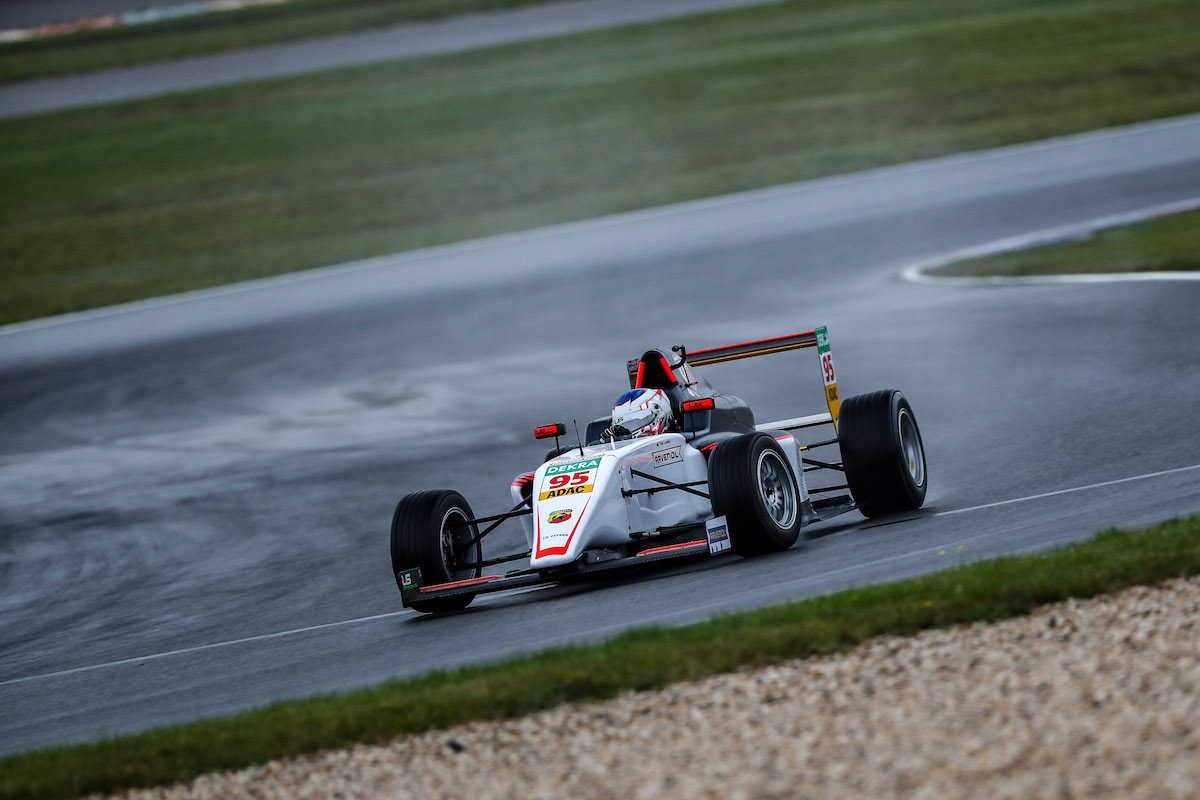 US Racing’s Vlad Lomko won in the wet at Lausitzring from fifth on the grid as almost all of the ADAC Formula 4 field made errors in the tricky conditions.

The race was delayed for some 15 minutes after the GT Masters qualifying session to clean up gravel and mud off of the circuit, and the drivers were given two formation laps.

Lomko started fifth on the grid and moved up to third at the start. Team-mate Tim Tramnitz, who started third, made the best start to lead in the early stages from polesitter Elias Seppanen and Joshua Duerksen.

Tramnitz’s lead didn’t last for long, making a mistake early in the race and dropping down to seventh and handing the lead to Seppanen from Duerksen, who had got past Lomko.

Durksen then passed Seppanen after the latter had to correct a slide mid-corner. Lomko remained in contention but dropped behind R-ace GP duo Kirill Smal and Victor Bernier.

Oliver Bearman and Jak Crawford were next to fall off shortly after, as Duerksen extended his lead to around 4.5 seconds to Bernier. Remarkably, all of the cars kept going despite the boggy grass being particularly tricky to get out of.

Smal got past both VAR’s Jonny Edgar and Bearman, before skidding off himself, while Tramnitz had his second excursion of the afternoon while running fourth.

The gap at the front between Duerksen and Bernier shrunk slightly before Duerksen was the next to fall off. Bernier’s lead was very short-lived, as Lomko was able to make his way past.

From there, Lomko kept it on the circuit and won the race by around five seconds from Bernier.

Despite his excursions, Seppanen was able to pressure Bernier right to the flag to round out the podium on his 17th birthday. Durksen eventually finished fourth, ahead of Bearman and Smal.

Title contenders Edgar and Crawford were only able to take seventh and eighth respectively in what is turning out to be a tricky weekend for the Red Bull-backed duo.

Tramnitz and R-ace GP’s Roee Meyuhas rounded out the top 10 – the latter also having no fewer than two spins.

Knopp, Zuniga (who had to pit for a new front wing) and Han were the last of the finishers as all 13 cars took the flag.