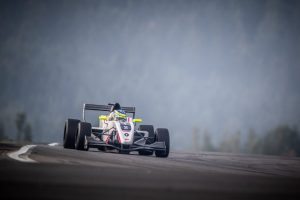 Sargeant topped the second qualifying group, and was the only man to set a time to break into the 1m55s. The American spent most of the session chasing Josef Kaufmann Racing’s Yifei Ye on track. The pair ran close together as they set their fastest times. Title contender Ye topped the order on a number of occasions, only for Sargeant to knock him off the top spot a few seconds later each time.

Ye eventually finished just 0.134 seconds behind Sargeant, putting him third on the grid for the opening race, alongside championship leader Christian Lundgaard on the second row.

Lundgaard and Fewtrell traded the top spot in the first qualifying group but, until Fewtrell put in a 1m56.431s lap that MP Motorsport driver Lundgaard could not respond to. Both drivers continued to improve in the closing stages of the session, with Fewtrell lowering the bar to? 1m56.141s with his final lap to go almost half a second quicker than Lundgaard.

R-ace GP’s Victor Martins was third fastest in group two, putting himself fifth on the grid alongside team-mate Charles Milesi.

Alexander Smolyar and returnee Thomas Neubauer will start seventh and ninth for Tech 1 Racing, with Arden’s Oscar Piastri and JD Motorsport’s Lorenzo Colombo completing the fourth and fifth rows of the grid.

How Euroformula Open plans to save F3 as we know it