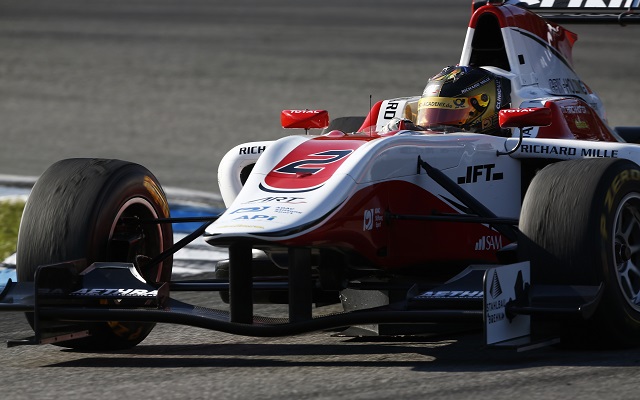 Kirchhofer, who won five races at the track in his two previous seasons in car racing, dethroned championship leader Alex Lynn from first by half a tenth with less than a minute remaining on the clock.

Lynn settled for second, having led the session coming into the drivers’ final runs on fresh tyres. His compatriot Nick Yelloly was the top Status performer in third and will be joined by yet another Brit Emil Bernstorff on row two.

Koiranen’s Jimmy Eriksson, who sits second in the drivers’ standings, recorded a solid fifth place, but will have to start tenth due to a pending grid penalty from Silvestone. As such, Mitch Gilbert – a fellow graduate of the 2012 German F3 season – inherited a surprise fifth for local team Hilmer.

Dino Zamparelli will start sixth despite running at the front early on in the session, while Richie Stanaway could only manage seventh, having set the pace in practice on Friday.

Single-seater returnees Matheo Tuscher and Dean Stoneman rounded out the top ten and will both move up a spot due to Eriksson’s penalty.