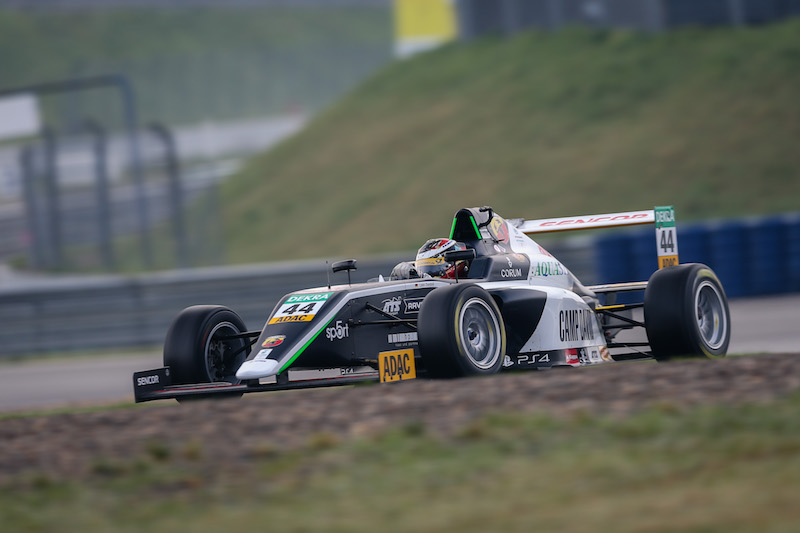 Lirim Zendeli won from pole position in a first race of the ADAC Formula 4 season at Oschersleben that was blighted by safety cars.

Zendeli, who has switched from Mucke Motorsport to US Racing for his third year in ADAC F4, topped both qualifying sessions on Friday evening, with team-mate Mick Wishofer joining him on the front row for race one.

The team-mates maintained their places through the opening corners, where the first safety car would be triggered when UAE champion Charles Weerts went off into the barriers at Turn 3 after trying to run side-by-side with Van Amersfoort team-mate Liam Lawson for fifth.

The second safety car came halfway through the 30-minute race to recover the car of Ido Cohen after he and Mucke Motorsport team-mate Leon Kohler both spun after getting wide coming onto the back straight.

There was only one lap of racing after the restart before Andreas Estner and Leonardo Lorandi spun after trying to take the high-speed version of Turn 1 side-by-side, with the latter getting his car beached on the outside of the track.

The race restarted for the third time with less than four minutes on the clock, but it would end under safety car conditions once more after Joey Alders spun out of eighth place.

It was after the final restart where Zendeli came under the most pressure from Wishofer but he held on to take his fourth ADAC F4 win, while Wishofer stood on the overall podium for the first time having scored just one outright point on his way to last year’s rookie crown.

Frederik Vesti had jumped both Lawson and Enzo Fittipaldi at the start to take third, but he struggled to keep up with Zendeli and Wishofer and was pushed back down to fifth just before the second safety car.

Lawson then got alongside Fittipaldi at the restart, with slight contact forcing the Prema driver wide and allowing Lawson to claim the place.

Fittipaldi repeated the move, cleanly, at the third restart, but Lawson grabbed third back in style through the right-left sequence at the end of the lap, just before team-mate Alders spun behind the neutralise the race for good.

Down the pit straight, Fittipaldi came under pressure from Vesti but it was actually David Schumacher who was able to make a move and take fifth from the Dane.

Konsta Lappalainen came from 15th on the grid to finish seventh with the Finnish KIC Driving Academy squad, ahead of Ferrari protege and car racing debutant Gianluca Petecof.

Niklas Krutten came ninth with Oliver Caldwell 10th, the British Prema driver recovering ground after a wide moment dropped him from eighth to 13th at the second restart.

Max Fewtrell makes it a double pole at Eurocup opener