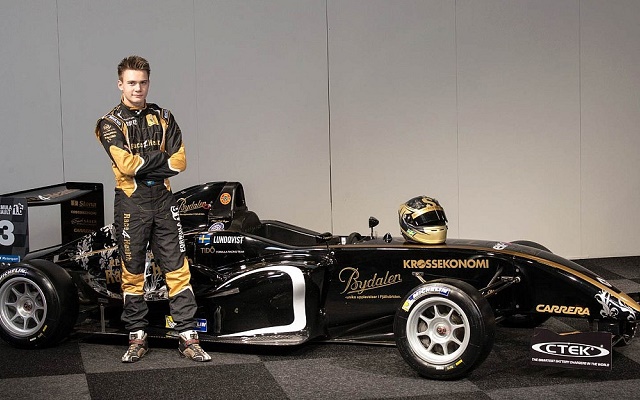 Swedish karting graduate Linus Lundqvist will make the step up to cars in 2015.

He won the 2010 and 2011 titles in the Swedish MKR series before finishing sixth in the national Rotax Max championship.

In 2014, he combined international and local karting, winning the KF2 Swedish Kart Festival and finishing 14th in the CIK-FIA KF World Championship.

“This is a great day for me,” stated Lundqvist. “Getting the chance to compete in formula racing is a dream come true, and it hasn’t really sunk in yet. This would not have been possible without Team Tido – I am incredibly grateful for this opportunity and hope I can repay their trust through good performances on the track.”

“I know I have a lot to learn and this will firstly be a learning season. I expect a steep development curve in the beginning and I would like to be fighting for the podium towards the end of the year. I will give it everything from the first to the last race.”

2015 will mark Team Tido’s return to FR1.6 Nordic after the team won the inaugural season of the championship with Erik Johansson.

“We are very pleased to welcome Linus welcome to Team Tido this season,” said David Von Schinkel. “He has made a really good impression on us in the winter. We have always been passionate about helping young, talented drivers to the extent we can, and we are now looking forward to a good and, hopefully, long association with Linus.”

“We think he has the qualities required to succeed in this sport, and it will be very interesting to follow his progress in Formula Renault 1.6.“