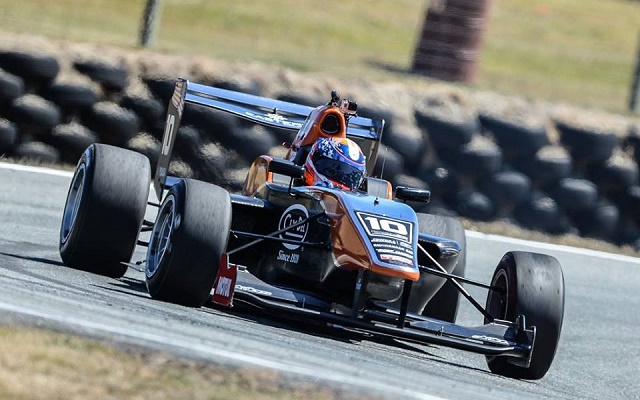 Giles Motorsport’s Santino Ferrucci emerged as a pacesetter over the three testing sessions for the Toyota Racing Series round at Teretonga.

Ferrucci featured among the frontrunners for much of the day before securing the top spot in final practice.

The American kicked off Friday as the quickest driver, leading the opening session at halfway point. However, James Munro, recovering from a Thursday marred by engine troubles, then took over at the top, before yielding to Brandon Maisano.

Sam MacLeod then entered the picture, vaulting to the top in the final ten-minute stretch. A subsequent red flag prematurely ended the fight for the honours, leaving the Scotsman as the leader.

Ferrucci took second, with third-placed Munro rounding out a Giles 1-2-3. Maisano was fourth, ahead of Thursday pacesetter Dzhon Simonyan and Arjun Maini.

Kiwi Munro then ran the show early on in session two, but it was Charlie Eastwood, just 16th in the first run, who eventually topped the timesheets. Maini, an everpresent figure in the top ten, was second, ahead of Mazepin, Stroll and Markelov.

Final practice was all about Ferrucci, who immediately assumed the lead and held it until the red flag. When the session restarted, the American improved to beat MacLeod’s first-practice benchmark, before becoming the first driver to go below 53s with his very next lap.

He remained first until the checkered flag, while Maini was second yet again. Alfonso Celis broke through to claim third, ahead of Munro and Riener.