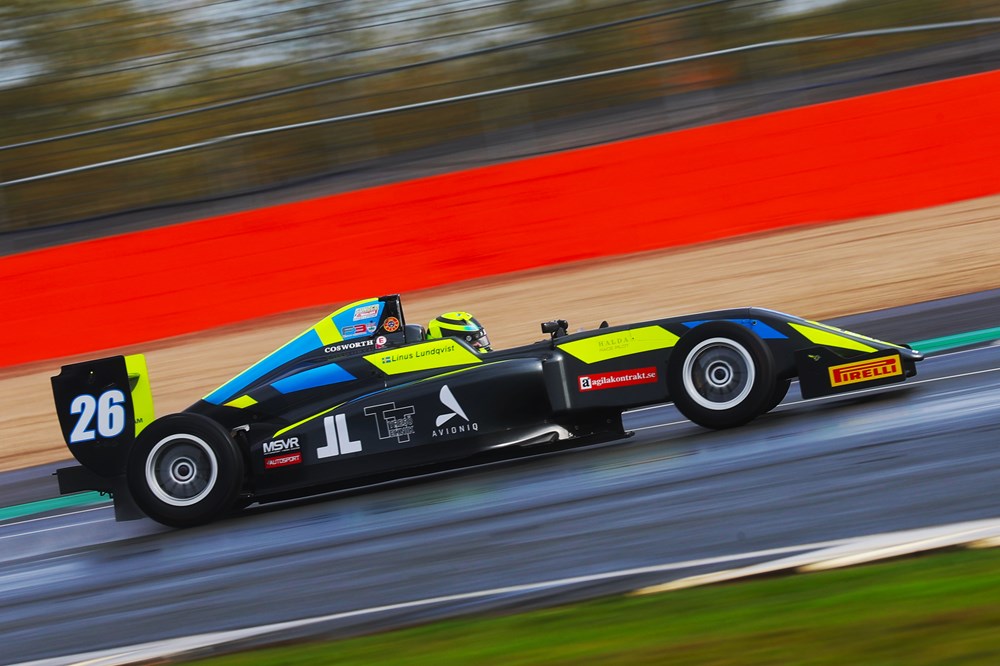 Linus Lundqvist claimed the BRDC British Formula 3 championship by winning the opening race of the weekend at Silverstone while rival Nicolai Kjaergaard failed to finish the first lap.

Taking pole position earlier in the day in very wet conditions, Lundqvist led off the line and had a 1.393-second lead by the end of the lap.

Kjaergaard, who started fourth alongside Tom Gamble and behind Carlin team-mate Billy Monger, was the only other driver who could win the British F3 championship heading into the final weekend of the season after Lundqvist had a difficult round at Donington.

While he needed an eighth-place finish or higher to keep the title fight alive if Lundqvist won the race, he didn’t finish the first lap of the race and had to retire.

Lundqvist consistently increased his lead over the first few laps ahead of Gamble, with the Fortec Motorsports driver getting ahead of Monger at the start. The Swede was able to keep the gap to at least three seconds until the chequered flag.

Behind the pair, Manuel Maldonado had been able to move up from sixth at the start to third at the end of the first lap, getting ahead of Monger and benefiting from Kjaergaard retiring and Clement Novalak falling down the field.

However?on lap two of 10 he lost position to Monger, who took the final podium position at the end of the race. Maldonado had started to catch up again over the final three laps, finishing just over half a second behind.

Ayrton Simmons finished his race in fifth and ahead of Mahadik and Jusuf Owega in sixth and seventh respectively.

Hampus Ericsson was able to hold off a train of cars behind him to take eighth position in his second weekend competing in British F3.

Behind him, Jamie Chadwick and Sasakorn Chaimongkol rounded off the top 10.