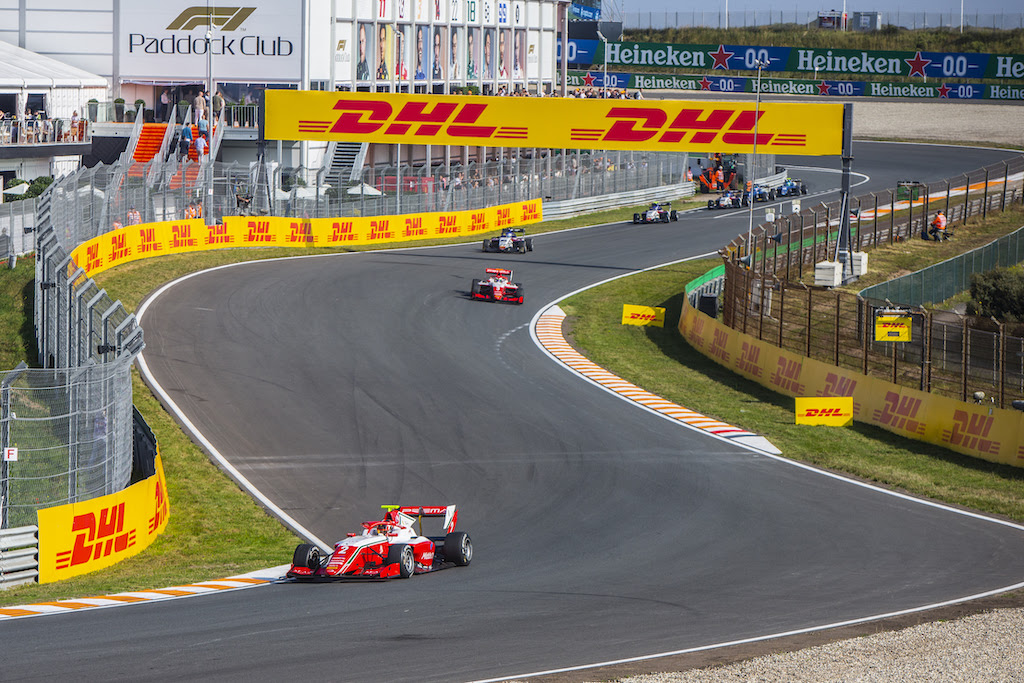 Arthur Leclerc resisted race-long pressure from Logan Sargeant to win the opening Formula 3 race of the weekend at Zandvoort.

Leclerc made a storming start from third to charge into the lead, then spent the next 17 laps defending from Sargeant.

A late safety car helped to relieve pressure, as a perfect restart lap for Leclerc – and no DRS for Sargeant – allowed him to break away for his second win. Red Bull junior Ayumu Iwasa finished third behind them.

Sargeant first took the lead from reversed grid pole-sitter Amaury Cordeel, but a move around the outside for Leclerc allowed the Prema driver to come through.

The top two were together from then on, Sargeant trying to force a mistake from Leclerc. At one point Leclerc locked both front wheels but Sargeant couldn’t come through. Before long, a DRS train formed.

It was only after contact between Johnathan Hoggard and Hunter Yeany further back that brought out the safety car that the pressure for Leclerc eased.

On the restart he left it as late as possible and managed to get the jump on Sargeant to finish 0.9 seconds ahead.

Sargeant looked under pressure from Iwasa on the restart, but Iwasa was attacked by Hitech GP team-mate Jak Crawford. The two ran side-by-side but Iwasa was able to hold on. Crawford finished fourth, just ahead of Caio Collet.

Championship leader Dennis Hauger had a strong drive from12th, making up two positions in the opening laps to break into the top 10. An incident ahead promoted him another couple of positions and, running eighth, he attempted to make a move around the outside of Victor Martins at turn 12.

He dipped a wheel into the gravel and lost a position to Clement Novalak. Hauger failed to reclaim it straight away, but eventually made the move work after the safety car period, then picked off Martins late on for seventh, just behind title rival Jack Doohan.

Cordeel had a dismal race. After the start he was attacked by Alexander Smolyar. They made contact and Cordeel was spun around while Smolyar got front wing damage, was shown the black-and-orange flag and then got a 10s stop-go penalty for causing the collision. The two finished 23rd and 24th.