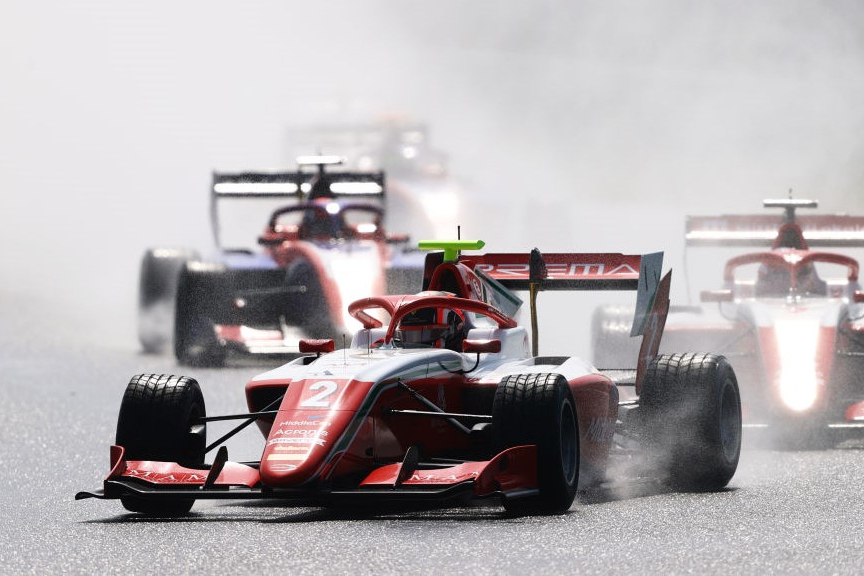 The Ferrari junior took a memorable FRegional European Championship win in the rain at Mugello in 2020, but struggled to keep team-mate Dennis Hauger at bay in last weekend’s final FIA F3 race at the Hungaroring in drying conditions.

It was his second wet FIA F3 race, after climbing from the back to finish 13th in race three at Paul Ricard, again held in mixed conditions. Leclerc highlighted the different challenges that the Dallara F3 2019 poses in the wet compared to FREC.

“It’s a completely different way to drive,” he said in reply to a press conference question from Formula Scout.

“From my side, it’s just [that] the tyres are much softer this year than the previous year, than in FRegional. You have to push a bit less, you have a lot more degradation, a lot more thermal degradation as well, so you need to be careful; you cannot do whatever you want.”

Both FIA F3 and FREC use Pirelli tyres, with the compounds provided in the latter series designed to prepare drivers for F3.

“In FRegional, it was a bit more you push as you can, you’re on the limit and the tyres don’t get a big drop [in performance], you just push until the end and that’s it.

“So there is more management. I’m struggling a bit to feel the tyre, to have clear feedback of what they tell me, so it’s just a bit difficult. That’s something I need to work on.”

Leclerc went on to speak about some of the lessons he learned while racing points leader Hauger early in the race.

“If you are P2 at the beginning of the race, you can see a bit the lines [taken], what is the other driver doing differently, so you can improve for that. Especially this race, I have a little experience with Dennis, because in the beginning I was quite fast, and then after I found some lines when he overtook me.