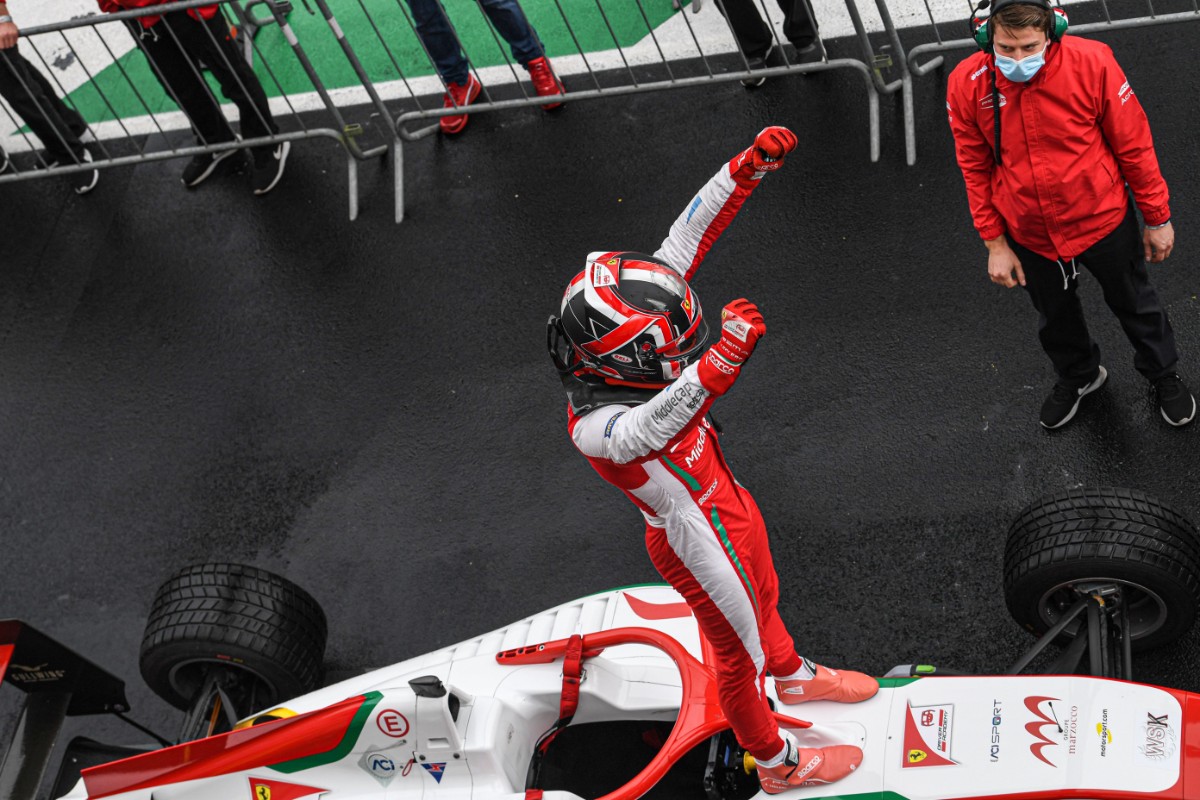 The race began on a wet track, but with several drivers on slick tyres. One of those was KIC Motorsport’s Konsta Lappalainen, who immediately crashed on the warm-up lap and delayed the actual race start.

Poleman Leclerc made the best getaway, but was already searching for wet patches of track by lap two as his tyres went away and after a few laps Prema pitted its three cars that started on grooved tyres.

This promoted Van Amersfoort Racing’s Pierre-Louis Chovet to a sizeable lead, with the family-run Gillian Henrion passing Prema’s Leclerc for second place before the latter pitted.

It didn’t take long for Chovet to start lapping drivers on grooved tyres, until it started to rain and he pitted himself. This left Henrion, who missed race one, almost half a minute ahead.

Henrion then pitted too for the first time, and emerged 20s behind Chovet and a few seconds ahead of Prema’s Jamie Chadwick, who had started on slicks and had also only needed to make one stop while most drivers made two by switching back to grooved tyres once the rain returned.

Leclerc and team-mate Gianluca Petecof were only just on the lead lap as a full-blown storm hit and the safety car was called out after Monolite Racing’s Andrea Cola spun.

This eradicated the gap of close to two minutes that Chovet had over Leclerc in fourth, although there were lapped cars between them that were going to slow the latter’s charge.

Chovet slowed everyone on the restart, then launched away as the bunched pack behind got lost in a cloud of spray.

Chadwick lost spots to the drivers behind still on the lead lap, while Henrion did a good job to hold off Leclerc for a lap.

A 1.7-second lead now existed between the top two, as sunshine returned, and once Leclerc reached the rear of Chovet he tried defending the inside line. Leclerc swept around the outside instead, and pulled away in the remaining two laps by an astonishing 15 seconds.

Petecof passed Henrion, whose pitstop was completed by the rival DR Formula team, for third place on the penultimate lap but still lost his championship lead to Leclerc by a single point.

KIC’s Patrik Pasma and Juri Vips were lapped before their second stops, limiting them to ninth and 10th.