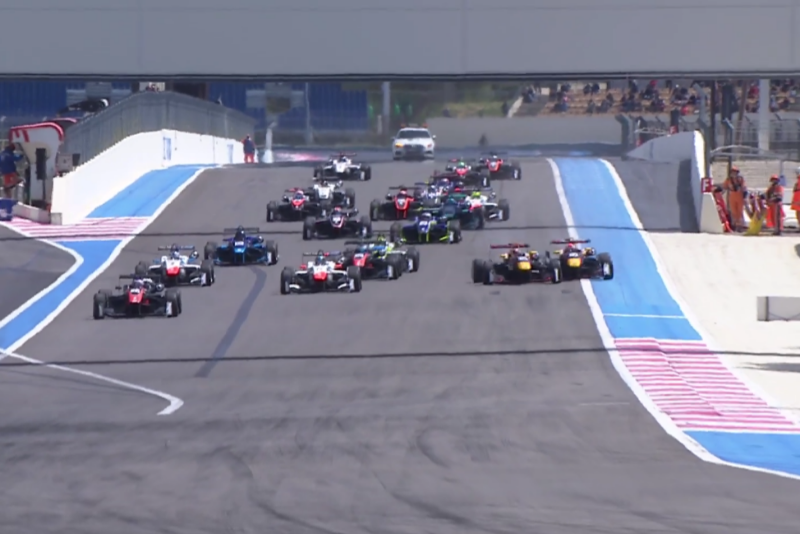 Liam Lawson has lost his second place finish in the second Euroformula Open race at Paul Ricard for the clash he had with Motopark team-mate Yuki Tsunoda.

The two Red Bull juniors made contact on the run down to Turn 1 after Lawson made a poor start from pole, and despite bouncing off each other in spectacular style were able to continue without significant damage.

Lawson fought back to second behind surprise winner Marino Sato, while Tsunoda struggled with his car and finished in sixth. After several hours of investigation, Lawson was handed a three-second penalty.

This dropped him to fourth behind Teo Martin Motorsport’s Guilherme Samaia and Lukas Dunner, who he had moved past by cutting the first chicane on the opening lap.

It was Samaia’s best result in EF Open, as well as the Teo Martin team’s first double podium since it merged with the deVillota Motorsport squad in 2016, which itself hadn’t achieved the feat since the 2012 season opener.

?We finally got qualifying sorted today,??said Lawson.??Then I just didn?t get a good start. Simple as that.

“I was trying to preload [the clutch], but it wasn?t preloading. When the lights went out, nothing happened, and I had to release the clutch too quickly. I then got wheelspin and it was just a bit of a disaster.

?I was third on the first lap. I got to second, and the balance of the car was a lot more aggressive than yesterday. I didn?t expect it, so I made a mistake and lost second. Had to get that back again.

“I had really strong pace, the car was mega, but towards the end the tyres faded out. I was just really aggressive with them right from the start.?

According to team-mate Sato, the poor starts of the Motopark drivers across the weekend could be attributed to the Balance of Performance formula applied to the engines catching the drivers out. Prior to the pre-event test day, none of the drivers had actually driven the Dallara F317 car in EF Open spec.