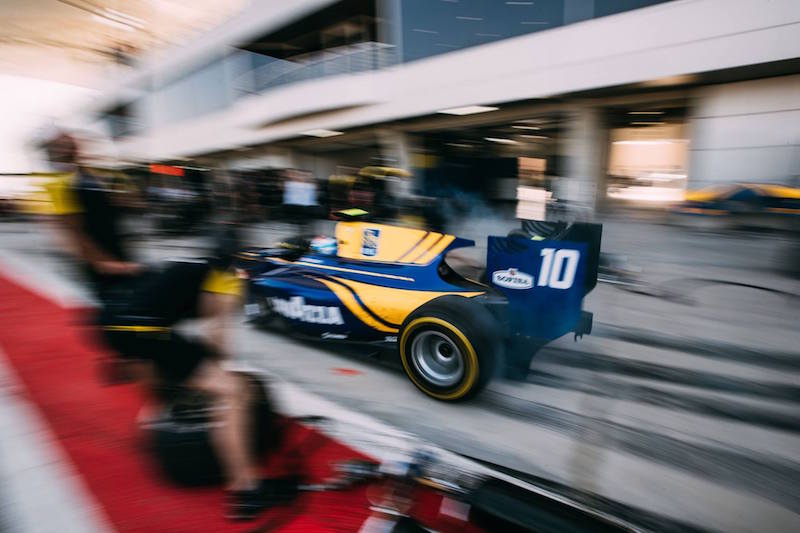 Nicholas Latifi and DAMS topped the second day of Formula 2 testing in Bahrain.

A 1m40.541 set midway through the morning session went unbeaten throughout the rest of the day for the Canadian as teams focused on race runs in the afternoon. Closest on outright pace were the two Russian Time drivers Luca Ghiotto and Artem Markelov, just over a tenth and a tenth-and-a-half behind.

The Jordan King/MP Motorsport combination were once again rapid, fourth overall and one thousandth of a second ahead of pace setter of the previous day Charles Leclerc (Prema).

In the afternoon it looked like King?s team-mate Sergio Sette Camara was the man to beat, as he twice took top spot after Rapax?s Johnny Cecotto Jr?s had relinquished him of the place. However in the final fifteen minutes a stunning lap from Mclaren junior Nyck de Vries meant Rapax went fastest once more.

After on-track action had ended it was revealed that Camara?s car was underweight, leading to the stewards rendering all his times invalid. This moved Racing Engineering?s Gustav Malja up to second in the afternoon times, and Leclerc up to third.

ART Grand Prix, who topped two of the three days in Barcelona, were only seventh and eighth but had trouble free runs for drivers Alexander Albon and Nobuharu Matsushita.

Campos?s Raoul Hyman, in his second day in a F2 car, vacated the bottom spot overall in a much improved day, and was 12th fastest in the afternoon session.

Spaniard Alex Palou has made the switch from GP3 to Japanese F3 for 2017. He will drive for the Drago Corse squad, with the season starting this weekend in Okayama. Palou has competed in GP3 with Campos for the last two seasons, and they hope to run him in F2 after his stint in Japan.