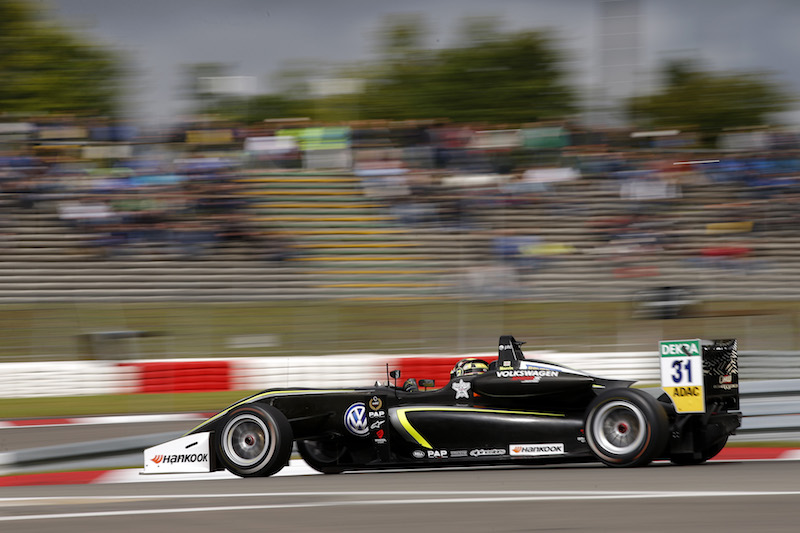 Lando Norris took victory in the third and final Formula 3 European Championship race at the Nurburgring, holding off Jake Hughes to take his ninth victory of the season.

It was a role reversal from race two where Hughes held off a late charge from Norris to claim victory.

Pole-sitter Callum Ilott got a better start and kept Norris behind at the start but a safety car on the opening lap was his undoing.

The safety car was deployed when Ferdinand Habsburg and Guan Yu Zhou collided at turn one on the opening lap, leaving both in the gravel.

On the restart on the third lap, Norris overtook Ilott at turn four. Grabbing the inside line through turns two and three, Norris found himself on the outside for turn four.

Although he made the move stick, it appeared the Carlin driver was off the track and late on in the race, it was announced that it would be investigated.

The gap between Norris and Hughes stayed between one and 1.5 seconds throughout the race, except in the closing minutes.

Although Hughes closed the gap to Norris in the latter stages, he was unable to make a move on the championship leader, who is now 73 points clear in the standings.

Jehan Daruvala also applied pressure to Ilott but the British driver was later able to pull away.

It meant Ilott finished in fifth place, ahead of Daruvala and Harrison Newey to close the gap to Joel Eriksson in the championship, with Eriksson finishing in eighth place. He was just behind Maximilian Gunther.

Late on in the race, Defourny had to take avoiding action after Mazepin rejoined the track after running wide. This was also placed under investigation.