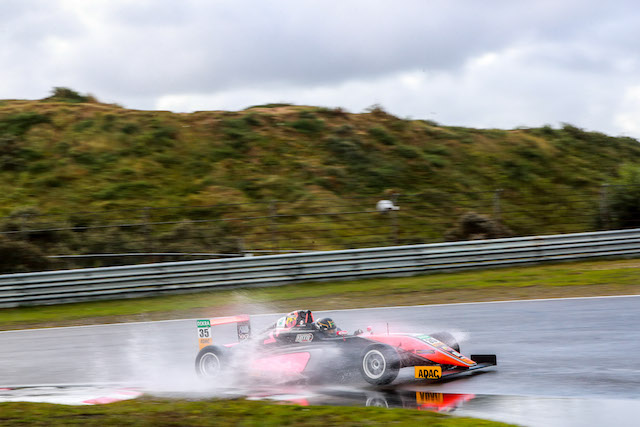 Laliberte went from third on the grid to the lead within half a lap of racing, following three laps behind the safety car at the start of the race.

The Canadian was already past?Felipe Drugovich for second place as they crossed the start-finish line, and then quickly caught polesitter and local?Janneau Esmeijer, who slid off into the gravel a few corners later, causing the reappearance of the safety car.

As Laliberte led Jonathan Aberdein and Drugovich at the restart, Mawson got a better exit than Schumacher from the tight Turn 3 left-hander, allowing him to get alongside the Prema driver.

He also spotted the chance to pass Schumacher’s team-mate?Juan Correa through the high-speed sweepers?that follow, but as he did so, he caught a large puddle on the inside of the left-hander that pitched him sideways into Correa, sending both off track.?Schumacher was also forced onto the grass and into a spin across the circuit.

With another incident in the lower order blocking the track at Turn 3, the race was red-flagged, and although the cars did return to the grid, the decision was later taken not to restart the race.

With results taken from before the second safety car restart, Laliberte was the winner in front of Aberdein and Drugovich.

Only half points were awarded, meaning?Mawson?leads Schumacher by 39 points going into the Hockenheim finale at the start of October.