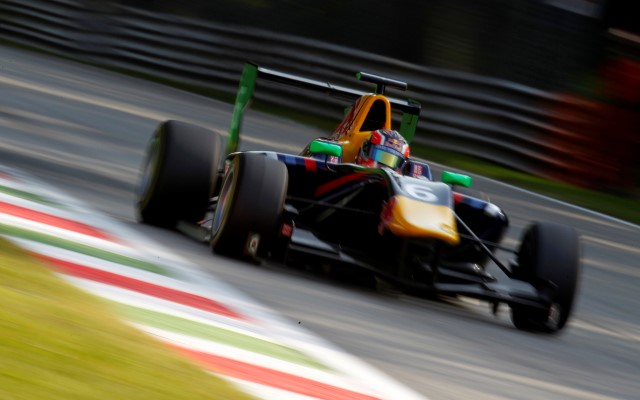 Daniil Kvyat capitalised on starting from pole position for the first GP3 race in Monza to leave a chaotic start behind him and claim a dominant victory that puts him second in the championship.

Kvyat held his lead off the start and was handed a good advantage when Dino Zamparelli took the decision to cut across the inside approaching the first corner, clattering into Marussia Manor team-mate Tio Ellinas and putting another serious dent in the Cypriot’s title challenge by taking him out of third place.

Carlos Sainz had made a fast start from sixth to follow Red Bull stable-mate Kvyat into turn one, but he was sent facing the wrong way on the exit by the helpless Ellinas. The Spaniard was able to take advantage of the speed advantage MW Arden have had this weekend to fight his way upto the points in ninth.

Nick Yelloly steered his way through the trouble to take second for Carlin, albeit 5.3 seconds behind Kvyat. Moments before the start, championship leader Facu Regalia had spun off towards the pit entry but was able to take up his eighth-place grid slot and come through and score his sixth podium of the year in third, holding off a race-long attack from Lewis Williamson in order to do so.

With both Ellinas and Conor Daly sustaining damage in the first lap melee, Regalia continues to lead the championship. His lead has decreased however, as Kvyat has climbed to second and closed the gap to 11 points after hauling the maximum 32 points for pole, victory and fastest lap.

Regalia and Williamson had relegated Carlin substitute Alexander Sims down to fifth, with the Briton finishing ahead of Kevin Korjus and Jack Harvey. Patric Niederhauser put a move on Patrick Kujala in the middle of the race to claim eighth and the reverse grid pole.

Stuvik beats Jones to race one victory at Spa