Kruger holds on to win second race at Knockhill 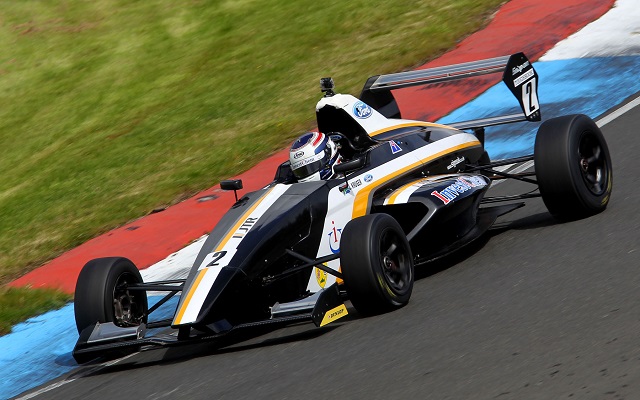 JTR’s Jayde Kruger took his seventh win of the Formula Ford GB season in the reverse-grid race two at Knockhill.

Starting on the front row, Kruger managed to wrestle the lead away from his teammate Max Marshall over the opening lap.

The South African then set out to increase his advantage over the opponents during the opening laps as Marshall held up race one winner Ashley Sutton.

By the halfpoint of the race, Sutton had gotten the South African’s lead down to a second and, over the next few laps, the JTR man’s advantage was virtually gone.

Entering the final five minutes of the race, Sutton was having a look for the lead, but was forced wide by a determined Kruger. The Brit set himself for another attempt two minutes later and went side-by-side with Kruger, but the South African managed to stay ahead.

Kruger then managed to rebuild a somewhat safe lead, with half a second up on Sutton coming into the final lap. The South African converted that into his seventh victory of the season, while Sutton, having seemingly settled for second, ended up having an off on the last lap, smashing into the tyre wall and losing out on the podium.

As such, Marshall inherited second, while championship leader Harrison Scott was promoted to the podium, having managed to overtake teammate Ricky Collard on the second lap of the race.

The race’s sole Sinter entrant – SWB’s Greg Holloway – completed the order in eighth, while Falcon’s Chris Mealin came into the pits to retire halfway through the race.

Sutton will attempt to bounce back from his DNF in race three, which he’ll start from pole position.