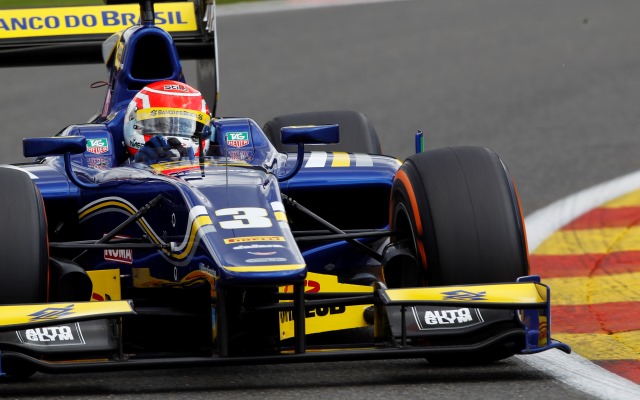 Felipe Nasr scored his fourth victory of the GP2 season as he charged to the win in the Spa-Francorchamps sprint race.

Starting from fifth on the grid, the Brazilian made a good start and slotted into the lead when pole-sitter Daniel Abt ran deep at La Source.

Nasr’s title rival Jolyon Palmer moved up into second at Les Combes, challenging Abt around the outside and then running off track while Abt twitched mid-corner.

That put Johnny Cecotto up into third place and the Trident driver took second away from Palmer at Les Combes on lap two. Cecotto then set off after Nasr and put him under sustained pressure. He was consistently faster through sector one, and when he got to within 0.6s of the leader crossing the line with six laps left, it looks like he could challenge for the lead.

Nasr though responded just when he needed to, setting a personal best first sector. He then pulled away up front in the closing laps, claiming a five-second win.

Cecotto scored his second podium of the weekend, while Palmer held off a charging Mitch Evans in the final corners to take third. Nasr’s win and two bonus points for the fastest lap of the top ten finishers reduces the gap between him and Palmer to 32 points having been 43 in arrears at the start of the weekend.

Evans had only passed Abt exiting Raidillon for the last time, but closed to just 0.4s off Palmer at the flag. Abt, reporting a problem, held onto fifth from local ace Stoffel Vandoorne.

Stefano Coletti charged to seventh, just 14 seconds off the winner, after starting 24th. Andre Negrao was shuffled back to eighth after a good start had got him up into fifth, and Tom Dillmann and?Julian Leal completed the top ten.

Feature race winner Raffaele Marciello spun down to the back of the pack on the opening lap before recovering to 14th.

Kruger holds on to win second race at Knockhill