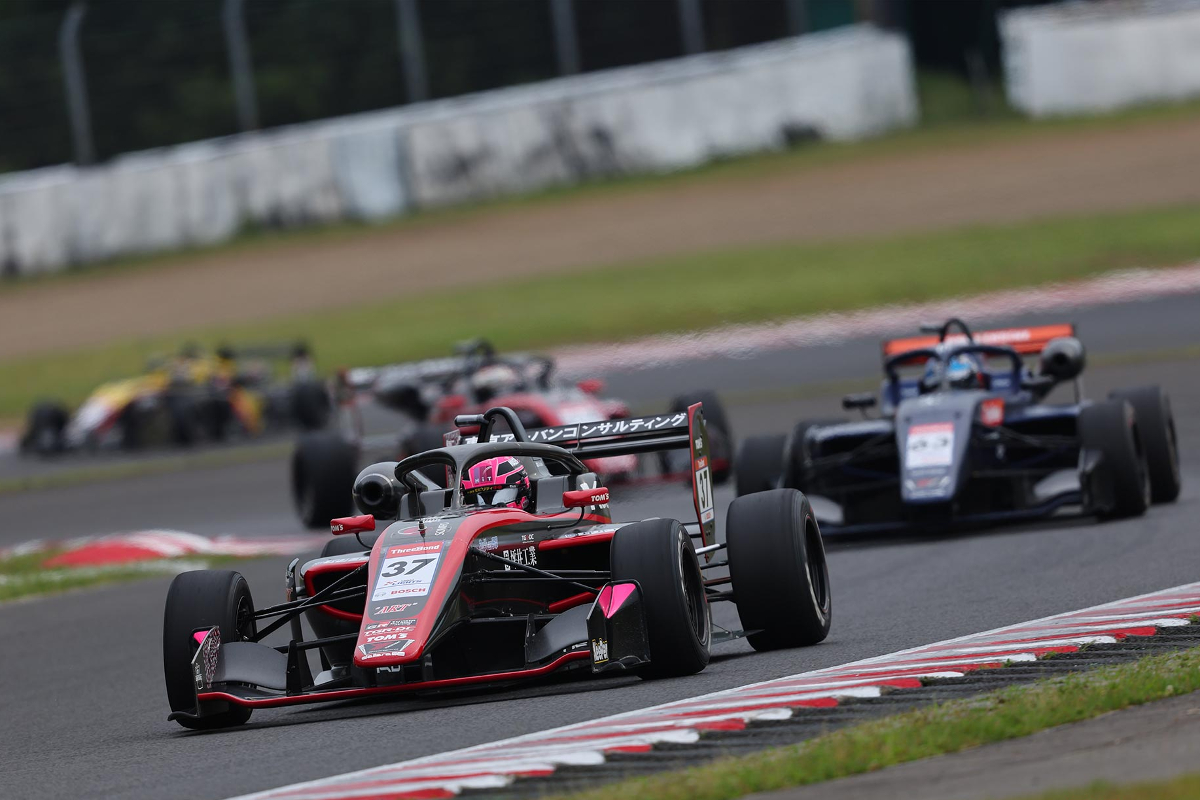 Super Formula Lights’ Sportsland SUGO round had a chaotic opening race on Saturday, with a third of the field retiring.

The first moment of drama occurred as the lights went out to start the race, as TOM’S team-mates Seita Nonaka and Hibiki Taira both stalled from the second row of the grid.

Everyone behind avoided hitting them, and Yuga Furutani was the most compromised by the stallers as he started fifth. B-MAX Racing pair Togo Suganami and Iori Kimura came either side of him on the inside and outside respectively down the pit straight, and as they approached the opening corner Kimura swept out wide while Suganami kept his car to the track’s inside edge just as Furutani turned in. The three converged again at the apex and while Kimura was able to just avoid contact as he drove by on the outside, Suganami and Furutani connected wheels and spun off.

Suganami had to retire, and the safety car was called out and picked up Kotaka as the leader. He had got a better start from the front row than poleman Kakunoshin Ohta and passed him before turn one.

Kimura attacked Ohta next on the restart, but it all went wrong as they both moved to the inside line coming down the pit straight and Kimura rearended Ohta. His own car smashed into the pitwall and stopped at turn one while Ohta was able to keep going but with a damaged gearbox leaked fluid all around the track and the race had to be red flagged for a long time.

The race restarted with several laps behind the safety car before the field was released and Kotaka streaked away. He avoided the further drama that was to come, with Yuya Hiraki demoting early spinner Furutani to third and a few laps later coming under pressure from Kohta Kawaai. Electrical problems then struck his car to end his race and cause another safety car period.

Kotaka mastered the next restart, while Taira passed Hiraki around the outside of turn one for second place after a lap. Furutani got onto Hiraki’s gearbox on the same lap, but it took several more before he could properly attempt a pass.

He chose the outside of turn one to make his move, but ended up getting loose and shooting off into the gravel. The banking there enabled him to return to track but in fourth behind Nonaka – who actually served a drive-through penalty for jumping the start – and ahead of Masters classification winner Nobuhiro Imada.

Nonaka almost overtook Hiraki for third as they came to the chequered flag, and Taira kept with Kotaka after the final restart.

Suganami was penalied 35 seconds for his clash and for speeding behind the safety car and Kimura got 30s plus a drive-through for jumping the start and his clash but their retirements meant the penalties were not served.