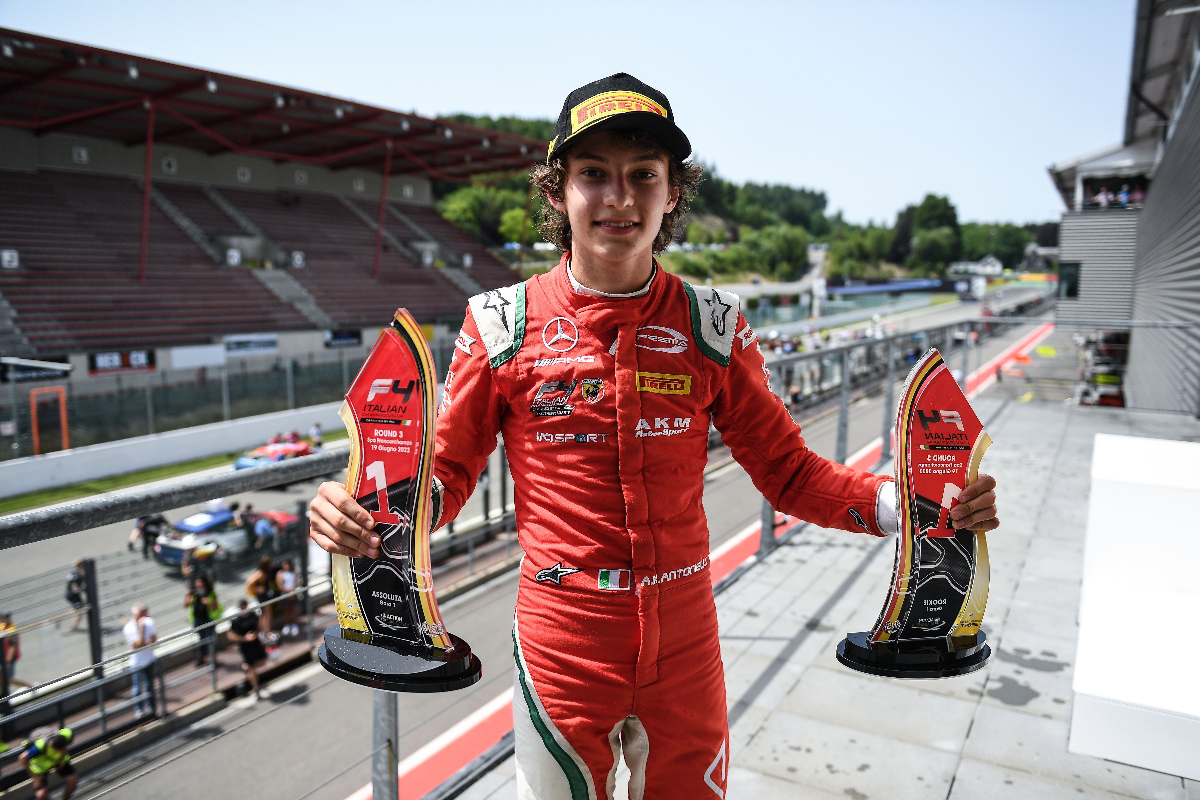 Poleman Antonelli made a strong start and led through the opening lap as his Prema team-mates squabbled behind and Conrad Laursen lost several places before being spun into retirement at Les Combes.

That meant the race quickly got put behind the safety car, and on the restart Rafael Camara utilised the slipstream to go around the outside of Antonelli entering Les Combes. Antonelli returned the favour on the next lap but Camara got back ahead and held off an attack on the lap after.

Next time by a pass was made, but Antonelli went through the Les Combes runoff and let Camara back through at Bruxelles. As he did, it bunched the top six up into a queue.

Rather than wait for Les Combes, Antonelli fired it down the inside of Camara at La Source and PHM Racing’s Nikita Bedrin, who had set fastest lap and passed Prema’s James Wharton for fourth, then attacked Camara down the Kemmel Straight.

But Camara had enough of a slipstream to get alongside Antonelli too. The leader stayed ahead but only by using the Les Combes runoff again, while US Racing’s charging Alex Dunne got a run on Bedrin and passed him exiting the complex but then leaving Bedrin briefly in the gravel and back behind Wharton as he used up all the road.

Antonelli stayed ahead until cleverly giving the lead back entering the Bus Stop chicane at the end of the lap, giving him the tow down the next straights. He went to the outside of Camara as they reached Les Combes and again went off, but this time Camara hadn’t given him room and so this time Antonelli didn’t concede the position gained.

Dunne had tried making it three-wide and he passed Camara on the next lap as the latter got a warning flag, then attacked Antonelli through the final two laps before the race was given a safety car finish when PHM’s Taylor Barnard and BWR Motorsports’ Alfio Spina collided at Les Combes.

Bedrin recovered to pass Camara for third, while Wharton finished fifth. US Racing’s Marcus Amand was sixth before breaking his front wing on the rear of Wharton’s car, and dropped to ninth behind Nikhil Bohra, Charlie Wurz and Ivan Domingues who had been involved the cars ahead throughout while Wurz had charged up the order.

Jonas Ried retired after colliding with Valerio Rinicella at the final corner.