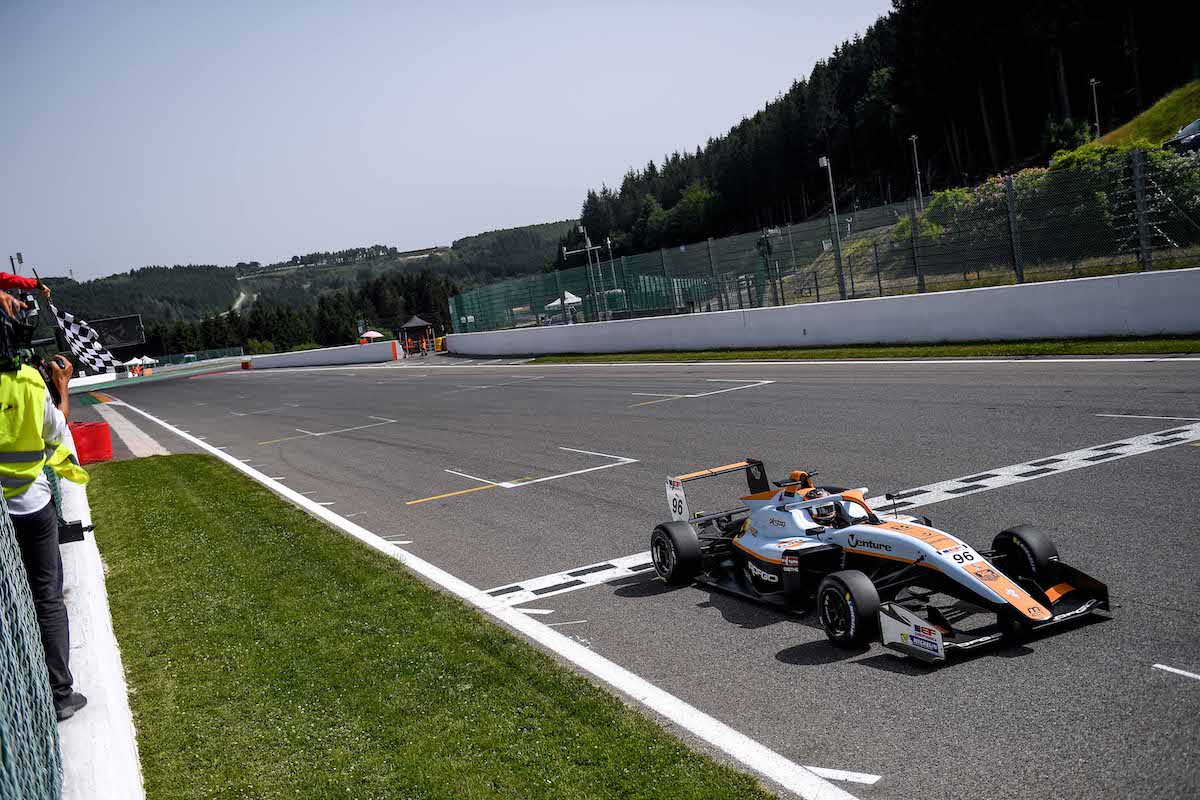 Motopark’s Oliver Goethe took Euroformula pole and victory on Saturday at Spa-Francorchamps, but it could have been a disastrous day if his strategy risk had not worked.

In qualifying Goethe completed only an outlap and a single timed lap before the session was ended early with little under two minutes remaining by red flags, and those came out just seconds after Goethe’s lap was completed.

However that lap was good enough for pole, and later in the day he converted it into his fifth win of the season to extend his championship lead.

“We did only one run so we saved a set of tyres,” Goethe said to Formula Scout, explaining his qualifying strategy.

“Most of the [Motopark] team did that as well. But obviously with one run there’s the pressure to deliver with that one lap, especially if there’s a red flag. Which there was. You only have one lap. I’m happy that I managed to deliver.

“We could have waited a bit more [for better track conditions] and that would have been obviously disastrous [with the red flag], and I would have been last, but there’s always that risk and I was a bit lucky that the red flag came after my lap. But in the end I did the lap so I’m really happy with that.

“I had to warm up the tyres quite a lot, because I did only an outlap and then straight away push, I didn’t do a prep lap. And Christian Mansell passed me so I had to push a bit more towards the end of the lap to keep a nice distance for a nice tow, and in the end it worked out perfectly.”

Mansell also passed Goethe in the race, ducking down the inside of Goethe at La Source on lap one but conceding the lead back to the poleman at Les Combes. Both were on fresh tyres for the race having done one run in qualifying, but Mansell put an extra lap on his set as he went for two flying laps in the session.

“Managing the tyres was quite difficult, but the pace was really good in the end so even with the hot track temperatures, and I was sliding around a lot, the pace was still very good,” Goethe added after taking victory and having his tyre-saving gamble not only work in qualifying but also the race, as he had a 13.248-second winning margin.

“So nothing to complain, the others must have had that [tyre struggle] too. In the end it was a very good race, and hopefully we can do the same for the next two.”

Goethe, Mansell, Josh Mason and Frederick Lubin – all run by Motopark under its main team and its Japanese offshoot CryptoTower Racing Team – will be in an envious position for Sunday’s two races as they will be starting on fresh tyres for both while drivers elsewhere on the grid will at one point have to rely on a used set.