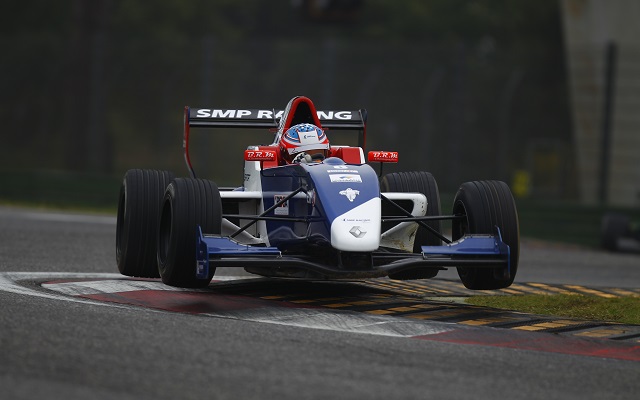 The 17-year-old Larionov joins Formula Renault Alps after making his single-seater debut in Formula Abarth in 2013, where he finished runner-up to fellow SMP racer Sergey Trofimov in the National Trophy standings.

“I am expecting really good fights within a strong field of competitors on the best European tracks,” noted Larionov. “It will be my first year in ALPS and I am here to learn and improve throughout the season. I am sure Koiranen GP engineers and mechanics will provide me the best? possible car to do so. I am proud to be part of SMP Racing by Koiranen GP team and I want to help the team to score points in the teams’ championship. I hope we will be fast and consistent. The Imola race is not so far, it was about time as I cannot wait to take the start of the first race?of the season!”

“I do not have a lot of experience in Formulae yet,” admitted Tarasov. “But I will do my best this season. First because I am very motivated, then because it is a real chance I reckon to have to be part of the ALPS championship with SMP Racing by KoiranenGP. We are very close to our first race in Imola and I feel very excited.”

The Finnish team fielded four cars under the SMP Racing by Koiranen moniker in the 2013 Formula Renault Alps season. The squad wound up taking seventh in the teams’ standings, with a best finish of fourth recorded by Hans Villemi.

“We are really pleased that SMP Racing trusted us again this season and placed two new Russians talents with us,” stated team manager Afa Heikkinen. “We are here to teach them everything they have to know about a Formula Renault 2.0 and the ALPS championship is the best place for them to do so. They will be facing very experienced contenders, but will be helped as well by our other drivers like McLaren driver Nyck de Vries. We will give them all the tools and support they need to perform this season.”