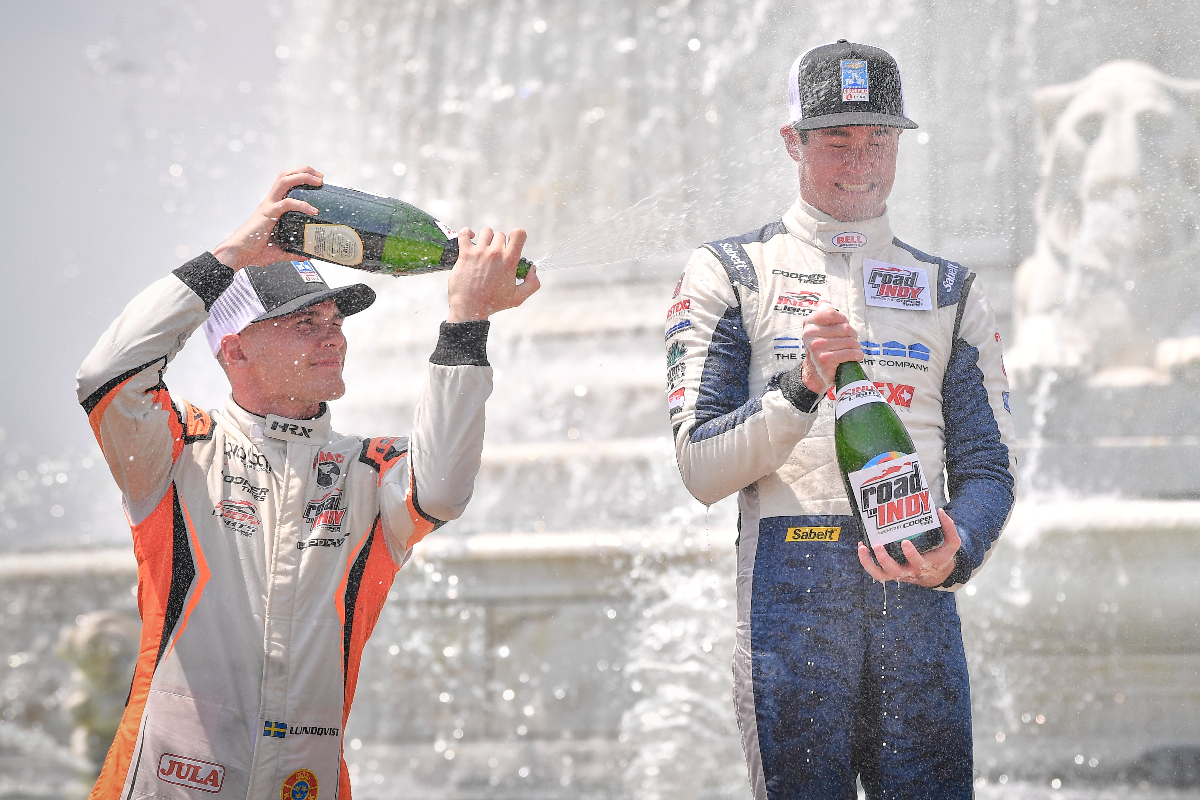 Andretti Autosport’s Kyle Kirkwood came from third on the grid to win Indy Lights’ second race of the weekend on the streets of Detroit.

Kirkwood, who won Saturday’s race and had a tyre life advantage over much of the grid on Sunday, passed HMD Motorsports’ David Malukas on the rolling start and hassled poleman Linus Lundqvist for the rest of the opening lap.

Coming out of the sixth corner on lap two he opted to take the outside down the sweeping ‘straight’ that leads down to turn seven. It got a little tight for Kirkwood at first but as the track kinked left he got his nose ahead and was then more confident on the brakes to be in the lead as he went into the next corner.

From there he held his advantage until the end of the race, although twice there was a caution period where he had to fend off Lundqvist on the restart.

Global Racing Group with HMD’s Lundqvist did spend most of the race looking at Malukas in his mirrors though, and when the second caution period left just one lap of green flag racing at the end it gave him one chance to attack Kirkwood into turn one before he switched focus back to defending second place.

He managed to get that job done, while Juncos Racing’s Toby Sowery trailed them in fourth place. Lundqvist now moves into the points lead past Malukas.

Andretti’s Danial Frost had been in fifth before crashing and causing the second caution period, which promoted stablemate Devlin DeFrancesco to the position.

DeFrancesco was one of many who at some point of the race spent time trying to get past Robert Megennis’s defences, with the Andretti driver starting from fourth but fading to ninth place with a lack of pace.

Lundqvist’s team-mate Benjamin Pedersen spent a long time behind him and when he eventually cleared him his position gain was short-lived as Juncos’s Sting Ray Robb then got past him. However Robb lost out on the final lap restart and dropped to 10th behind Pedersen, Christian Bogle (Carlin with Jay Howard Driver Development), Megennis and Nikita Lastochkin (HMD).

Bogle’s team-mate Alex Peroni caused the first caution period when he clipped the tyre barriers and crashed after passing Megennis around the outside.